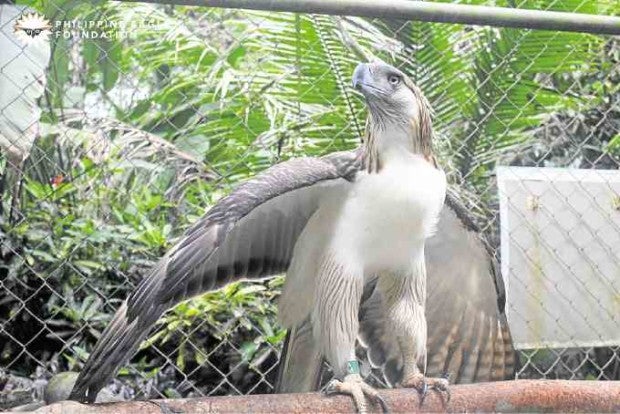 DAVAO CITY—Twenty-five years ago, on Jan. 15, the then 20-square-meter incubation and breeding room of the Philippine Eagle Center in Malagos, Baguio District, here erupted into cheers and high fives.

At last, after 14 years of research, the Philippine Eagle Foundation (PEF) had managed to conceive through artificial insemination, and hatch, its first eagle named Pag-asa.

“I was there at that time. Everyone was anxious as the chick refused to break out of its shell on its own,” Dennis Salvador, PEF’s executive director, recalled.

“We did not go to sleep after the chick peeked through the shell. We did not know how long before it fully emerges,” Tadena told the Inquirer.

Pag-asa, a critically endangered eagle, drew attention on global efforts to save the environment and other species.

“Pag-asa’s success gave us hope that reintroducing species in places where they had been extirpated was now possible,” Salvador said. “Eagles being top predators of the Philippine rainforest ecosystem, their presence is indicative of the (system’s) good health,” he added.

The foundation, which depends heavily on donations for its project that includes breeding endangered species and mounting education campaigns to save them, has so far produced 27 captive-bred Philippine Eagles. It is best known for its success in the captive propagation of the country’s national symbol.

According to the National Eagle Center in Minnesota, an eagle in the wild that makes it to adulthood might live 20 to 25 years. But in captivity, eagles are known to live much longer, up to 50 years, due to a controlled environment, nutrient-rich diet and veterinary care.

After Pag-asa’s hatching, Salvador said the center was also able to establish incubation and rearing protocols, since the eagle “helped establish good practices.”

“Pag-asa was hand-reared and subsequently developed as an imprinted donor for artificial insemination,” he said.

The foundation has been trying to breed eagles in captivity to increase the bird’s population.

Philippine Eagles lay an egg only once every two years, making their conservation an even more daunting task.

The Philippine Eagle, the world’s largest bird of prey, was declared an endangered species in 1965 and was later classified “critically endangered” by the International Union for the Conservation of Nature. It was declared the country’s national bird in July, 1995.

Today, there are only 400 pairs remaining in the wild.

Following Pag-asa’s success, Salvador said “the great Philippine Eagle is not only our flagship [species] for wildlife conservation but also the best indicator of the forest ecosystem’s health.”

Twenty-one years after hatching, Pag-asa and his mate, Kalinawan, produced a female eagle named Mabuhay that will turn three on Feb. 9.

Like her father, Mabuhay was a product of “cooperative artificial insemination,” which involves collecting the semen of male eagles and implanting them into female eagles.

Salvador said aside from being an important semen donor for the breeding program, “Pag-asa will continue to serve as a beacon of hope for the species and teach our people about the importance of our natural heritage.”