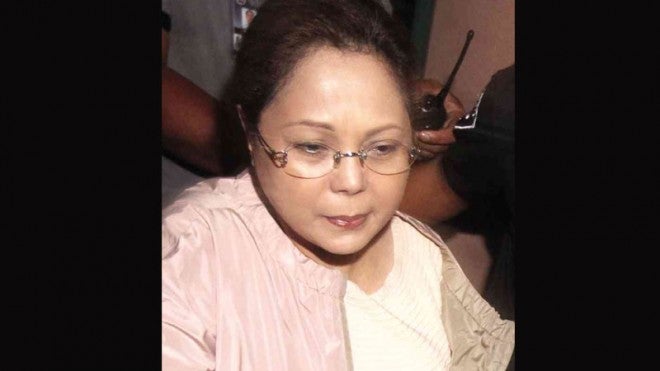 There’s no stopping the plunder trial of Jessica Lucila “Gigi” Reyes, the detained chief of staff of former senator Juan Ponce Enrile, after the Sandiganbayan denied her motion to quash her plunder charge over the pork barrel scam.

In a resolution promulgated January 3, the anti-graft court Special Third Division found no merit in Reyes’ bid to quash her plunder information which she claimed to be confusing.

The court maintained that plunder information filed by the prosecutors against Reyes was able to establish the offense being charged.

“The facts charged in the Information sufficiently charge the crime of plunder; hence a motion to quash is legally unavailing to accused Reyes,” the court said.

The court found no merit in Reyes’ claim that the bill of particulars, which contained conjunctions such as “or” and “and/or,” “confuses and confounds her,” violates her right to be informed of her charge and fails to help her prepare for her defense.

Enrile was earlier allowed by the Supreme Court to obtain a bill of particulars from the Ombudsman to help him understand the information against him.

The court said the prosecution’s “and/or” phrases to connect Reyes with her deputy chief of staff Jose Antonio Evangelista, who was charged with graft, and Reyes with Enrile, only meant that the three repeatedly received alleged kickbacks from scam mastermind Janet Lim-Napoles.

“There is nothing in the allegations in the bill of particulars which could confuse accused Reyes in preparing her defense in this case,” the court said.

The court noted that Reyes’ motion to quash actually centered on Enrile’s bill of particulars, which she claimed failed to specify the overt acts imputed against her.

But the court said it was too late for Reyes to ask for particularities in the information because the rules of court state that a bill of particulars must be filed before arraignment.

Reyes had been arraigned and the court entered a not guilty plea after she refused to enter a plea.

“Wherefore, the motion to quash filed by accused Reyes is denied for lack of merit,” the court ruled.

The court also found no merit in Reyes’ claim that the prosecution has admitted facts in the case that negate the prima facie truth of the allegations, making the information charged quashable.

The court said such claim was “baseless” because once an accused avails of a motion to quash, the accused hypothetically admits the facts alleged in the information.

Reyes said the prosecution has admitted certain facts in the case that negate her plunder charge – that her signatures were forged; that the daily disbursement record and summary of rebates of principal whistleblower Benhur Luy do not reflect her alleged kickbacks; that witness Ruby Tuason’s testimony against her was devoid of details; that the processing of the pork barrel fund releases did not involve her; among others.

The court said the prosecution was correct in saying that the aforementioned facts are evidentiary matters that can only be threshed out in a full blown trial.

The court also found no merit in Reyes’ plea for the court to release her from detention on the back of her good behavior while in custody, her voluntary return to the Philippines and surrender, and her not being a flight risk.

The court said since there is no merit in Reyes’ quashal motion, there is also no legal basis for her discharge from detention.

“Even on equitable grounds, the Court cannot order the release of accused Reyes,” the court said.

In his dissenting opinion, Martires said the plunder information failed to establish an offense and that the bill of particulars was also “silent as to how accused Enrile received the kickbacks or commissions.”

“To reiterate, ‘without a number of overt or criminal acts, there can be no crime of plunder.’ Hence, the granting of the motion to quash filed by accused Reyes is in order,” Martires wrote.

In her motion to quash, Reyes asked the court to quash the plunder information against her for the failure of the prosecution to prove that the facts of the case constitute the non-bailable offense of plunder.

Reyes, who has been detained for over two years after the filing of the information in June 2014, said the bill of particulars submitted by the prosecution failed to prove that her alleged offense constitutes plunder.

Reyes through her lawyers said the bill of particulars, which stated that Enrile committed plunder with Reyes or his deputy chief of staff Antonio Evangelista (charged with graft), only made the information more confusing.

“The Bill of Particulars has made a judicially-declared vague and nebulous Information even more confusing, and the problematic task of preparing the corresponding refuting evidence doubly difficult,” her motion read.

Reyes was accused by state witness socialite Ruby Tuason of receiving the share of Enrile from the pork barrel scam, a scheme of diverting lawmakers’ Priority Development Assistance Funds (PDAF) to ghost projects for kickbacks.

While Enrile was granted bail by the Supreme Court on humanitarian grounds, Reyes is detained at the female dormitory of the Camp Bagong Diwa in Taguig pending her plunder trial.

Another witness, Marina Sula, told the court that Reyes once complained her kickbacks from the scam were short of P500,000. CDG/rga