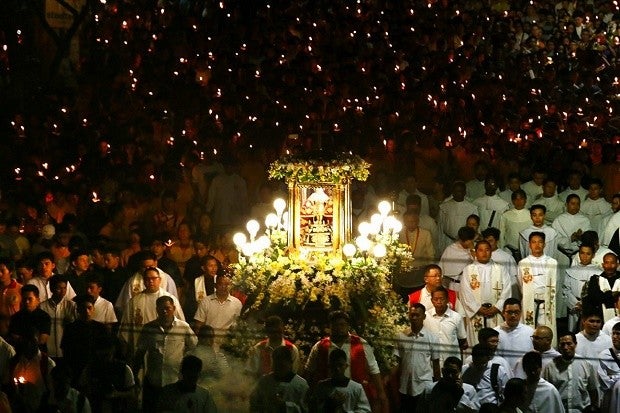 The image of the Holy Child Jesus is being brought from Fuente Osmeña rotunda to the Basilica Minore del Sto. Niño in a two-km procession at 4:30 a.m. for annual “Walk with Jesus,” which signals the start of the Sinulog festivities. JUNJIE MENDOZA/INQUIRER VISAYAS

CEBU CITY – Shortly before daybreak, a sea of candlelight illumined the length of Osmeña Boulevard where the image of the Sto. Niño de Cebu was brought in a procession to mark the start of the 452nd Fiesta Señor celebration.

Devotees braved a wet, chilly dawn to join the two-kilometer procession from the Fuente Osmeña rotunda to the Basilica Minore del Sto. Niño for the 4:30 a.m. annual “Walk with Jesus” and the first novena Mass.

Young and old devotees carried their own images of the Sto. Niño, recited the holy rosary, and sang liturgical hymns which were broadcast live on radio and amplified by speakers.

There were no fireworks or balloons along the route of the procession following earlier appeals by Augustinian priests in charge of the basilica to maintain the solemnity of the event and public safety.

The flower-decked carroza that carried the image of the Sto. Niño arrived at the basilica at 5:45 a.m. and was welcomed with shouts of “Pit Señor” and the pealing of church bells.

The 3,500-capacity church courtyard was packed. Many had to stay on the streets outside to participate in the Mass  beamed on large LED screens and television monitors. 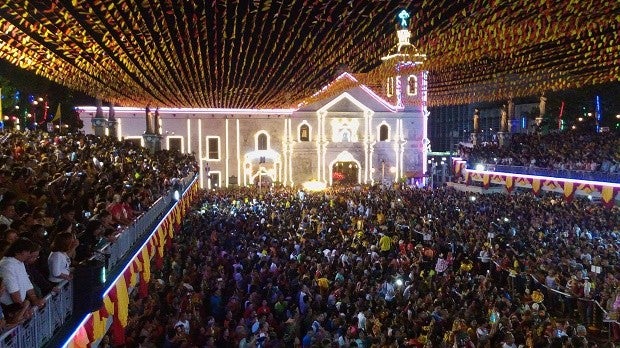 The magnificent facade of the Sto. Niño basilica is the backdrop of a crowd of devotees who welcome the flower-decked carroza of the Sto. Niño that arrives from the “Walk with Jesus” procession. ADOR MAYOL/INQUIRER VISAYAS

A total of 240 policemen were deployed along the procession route and at the basilica complex to secure the crowd.

In his homily, Fr. Pacifico Nohara Jr., rector of the basilica, called on the people to remain with Jesus who chose to become a human being to share in their sufferings and pains and to save them from eternal damnation.

“He is calling us to be one with Him. Our Holy Child invites us all to come to Him and to embrace His presence in our lives. There’s nothing that could be more wonderful than living a life truly inspired by the love of God, fully devoted to our faith, and united to others by doing good deeds,” he said.

The theme for this year’s feast is “Santo Niño: Source of Communion, Protector of Creation” which is patterned to the pastoral thrust of the Catholic Bishops’ Conference of the Philippines on the Year of the Parish, and Pope Francis’ encyclical Laudato Si on the care of the environment.

Laudato Si means “Praise be to you” which is the first line of a canticle by St. Francis that praises God with all of His creation.

In reference to the environmental aspect of the theme, Nohara called on the faithful to take care of everything God has entrusted them.

“All of us are stewards of creation. We are called to love, protect, and preserve all He has given us. Destroying them is threatening our own lives and the lives of our future generations,” said Nohara, a native of Pilar town, Camotes Island in Cebu, who is on his first year as rector of the basilica.

“We are not required to be super human to do great things and save the world. Small beginnings matter as long as we do it for the love of God and His creation,” he added.

The devotion to the Sto. Niño, the priest said, is not confined to venerating the Holy Child’s sacred image.

“Yes, we Filipinos are so much devoted to the Sto. Niño, but we see around us street children, abused children, and those abandoned by parents,” Nohara said.

“May our devotion to the Sto. Niño lead us to loving and caring for our children as well as the weak and vulnerable in our society. Let us continue our devotion, not just during the Fiesta Señor, but through the rest of our lives,” he added.

As part of tradition, the fiesta’s Hermano and Hermana Mayores for 2017—Leo and Cristina Manguilimotan—were officially presented to the people during the Mass with about 60 diocesan and religious priests as concelebrants.

The couple,  natives of Hipodromo, Cebu City, own Arbee’s Bakeshop.

During the offertory, people waved their hands in unison as they sang “Bato-Balani sa Gugma,” an ancient hymn in honor of the Sto. Niño, which literally means “Magnet of Love.”

At the end of the first novena Mass, the basilica rector carried the image of the Sto. Niño and led people in dancing the traditional Sinulog for about five minutes.

To accommodate throngs of devotees, the basilica will be open 24 hours a day starting January 5 until the feast day on Jan. 15.

Except on January 5 and 13, where there are dawn processions, 11 Masses will be held every day at the outdoor Pilgrim Center leading to the feast of the Sto. Nino.