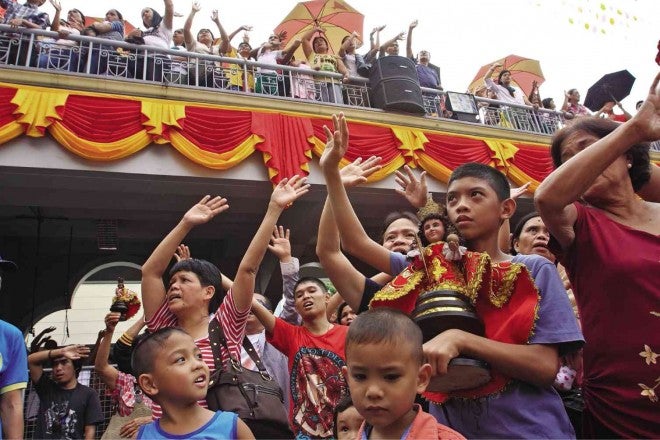 The Sinulog Festival in Cebu is held every year in January in honor of the Holy Child Jesus or the Santo Niño. (PHOTO BY JUNJIE MENDOZA/ CEBU DAILY NEWS)

CEBU CITY — To ward off possible terror attacks, the police and military personnel are set to enforce stringent security measures for the 452nd Fiesta Señor celebration which will start on Thursday.

Chief Supt. Noli Taliño, director of the Police Regional Office in Central Visayas (PRO-7), said about 5,000 law enforcers have been tapped to secure the Basilica Minore del Sto. Niño and other places of convergence, including the procession and parade routes.

He discouraged people from bringing backpacks and urged them to use clear plastic bags for security purposes.

Wearing of jewelry, he said, should also be avoided so as not to entice thieves.

“The security plan (for the Fiesta Señor and the Sinulog) is in place,” said Taliño who has been collaborating with the Armed Forces’ Central Command in ensuring peace and order during the Fiesta Señor celebration.

For now, he said they have not received any “direct and specific threats.”

“But I call on the public to be vigilant and alert. If you notice any unusual activity or suspicious-looking persons, please immediately report them to the police,” said Taliño during a press conference at the Basilica Minore del Sto. Niño on Tuesday morning.

“Our policemen are all over the place. If you need assistance, please approach them,” he added.

Fr. Aladdin Luzon, who heads the committee on security of the Fiesta Señor, said the basilica has also added security guards to help law enforcers maintain peace and order.

“We now have a total of 95 security guards for the Fiesta Señor — 65 of them will man the basilica complex at daytime. The rest will take over at night,” he said.

There will also be K9 dogs at the basilica complex.

At least eight large LED screens and several television monitors are mounted inside and outside the church for people to view the Mass.

Communion kiosks have also been installed in the church yard and in the adjoining streets.

Lay ministers will be stationed there to distribute sacred hosts during Holy Communion so devotees will not have to crowd into the pilgrim center.

Red and yellow umbrellas are also available for devotees but these have to be returned after use.

The Fiesta Señor 2017 officially starts on January 5 with the annual “Walk with Jesus,” a penitential foot procession from Fuente Osmeña to the basilica at 4:30 a.m.

On Jan. 13, another dawn procession will bring the image of the Our Lady of Guadalupe from Fuente Osmeña to the basilica.

After the 5:30 a.m. Mass, the images of the Sto. Niño and the Our Lady of Guadalupe de Cebu will be brought in a motorcade to the National Shrine of St. Joseph in Mandaue City.

This year’s traslacion will pass by MJ Cuenco Avenue straight to the national highway of Mandaue City, right turn to A. Del Rosario Street, and right to SB Cabahug Street going to St. Joseph’s Shrine.

The annual “traslacion,” a Spanish word which means to transfer or move, depicts the “reunion” of the Holy Family—the child Jesus, his mother Mary, and foster father Joseph.

On the following day, Jan. 14, after an overnight vigil, the image of the Sto. Niño and the Our Lady of Guadalupe will sail down the Mactan Channel on board a yacht for the fluvial procession that will start at 6 a.m. from the Ouano Wharf to Pier 1 in Cebu City.

A foot procession from Pier 1 will bring the images back to the basilica where the reenactment of the first Mass, baptism, and wedding will be held.

In the afternoon, the grand solemn procession of the Sto. Niño will be held on the major thoroughfares of the city.

From the basilica, the carrozas of St. Joseph, Our Lady of Consolation, and the Sto. Niño de Cebu will pass along Osmeña Boulevard.

Upon reaching the Fuente Osmeña circle, the procession will proceed to General Maxilom Avenue, Imus Street, MJ Cuenco Avenue, Urdaneta Street, P. Burgos Street, and back to the basilica.

A Mass will be celebrated by Palo Archbishop John Du at 6 p.m. to be followed by the one-hour traditional religious Sinulog.

On Sunday, Jan. 15, the feast day of the Sto. Nino, Cebu Archbishop Jose Palma will officiate a pontifical Mass at 6 a.m.  SFM