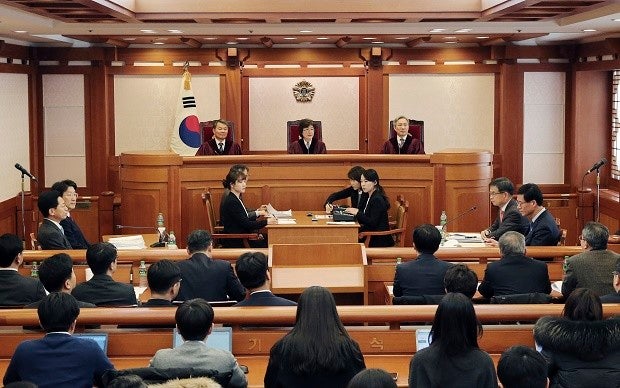 South Korea’s Constitutional Court holds a preparatory meeting to review the impeachment of President Park Geun-hye on corruption charges centered on an influence-peddling scandal involving a confidante in Seoul, South Korea, Friday, Dec. 30, The court on Friday said it cannot require Park to testify in her impeachment trial that enters the argument phase next week, dismissing demands by lawmakers who voted to remove her over a corruption scandal. AP

SEOUL, South Korea — South Korea’s Constitutional Court has begun hearing oral arguments in the impeachment trial of President Park Geun-hye, who lawmakers voted to remove over a corruption scandal that saw millions of people protest over the last several months.

Park’s lawyers and lawmakers traded pointed arguments Thursday on the validity of accusations that she colluded with a confidante to extort money and favors from companies and allowed the friend to unlawfully interfere with government affairs.

The hearing proceeded without Park, who refused to testify for the second time following her no-show on Tuesday. The nine-justice court cannot force Park to appear.

The court plans to hear witnesses later Thursday. The court has six months to decide if Park should permanently step down or should be reinstated.