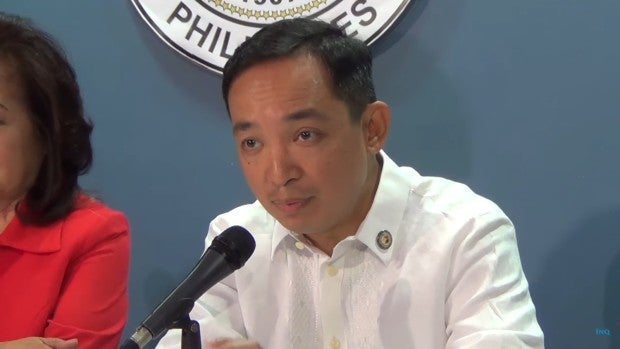 The Makabayan bloc in Congress urged President Rodrigo Duterte to fulfill his promise of releasing the 130 political detainees, including the elderly and sick, and not treat them as his “alas” or bargaining chip in the peace talks.

In a press briefing at the House of Representatives on Wednesday, Act Teachers Rep. Antonio Tinio criticized Duterte for treating the detainees as his “alas,” while two Davao-based lawmakers who knew Duterte personally still remained confident that the president would fulfill his promise to release the detainees, especially the elderly and sick.

READ: Militant solons tell Duterte: We are not willing to die for you

Tinio slammed Duterte for “putting the cart before the horse” for putting the bilateral ceasefire as a condition for the release of the 130 political prisoners, even though the negotiating panels have yet to talk about the root causes of the communist insurgency.

“Nababahala tayo na minamadali ni Pangulong Duterte ang bilateral ceasefire, hindi pa napag-u-usapan ang substantive agenda ng peace talks, hindi pa napag-u-usapan ang mga ugat kung bakit may labanan in the first place (We are bothered by the fact that President Duterte is fast tracking the bilateral ceasefire, without having to talk about the substantive agenda of the peace talks, the root causes of the armed conflict in the first place),” Tinio said.

Anakpawis Rep. Ariel Casilao said they continue to “invoke (Duterte’s) previous commitment last May that he is very willing to give amnesty for all political prisoners.”

Casilao said Duterte may just be promising amnesty to them while promising a different one to another, but he denied that this was part of Duterte’s “double speak.”

Casilao said the release of the political prisoners is not a matter of losing bargaining chips, citing the death of 66-year-old political prisoner Bernabe Ocasla who succumbed to a heart attack while in detention.

(This is not a question of losing cards. It’s beyond the question of social justice. This is not just a game, that you will treat it like a scare tactic by not releasing the political prisoners.)

“Ang kanilang pagiging matanda, at napakatagal na detained, at walang in-u-usad na takbo ng kanilang kaso, (Their being elderly, their incarceration, and the fact their cases are not making progress) and they are suffering different illnesses, are reasons enough for the president to consider immediate release for humanitarian considerations,” Casilao added.

Bayan Muna Rep. Carlos Zarate said the president does not want the sick and elderly, even expectant mothers, to remain in detention as political prisoners.

“He committed to release the sick and the elderly… In fact, he said bakit naging nanay ang mga yan sa loob ng kulungan, when it’s explained to him na nung nahuli, mayroong buntis at doon na nanganak sa kulungan (In fact, he asked why are there mothers in detention, when it was explained to him they were already pregnant when they were captured, and that they gave birth behind bars),” Zarate said.

The Left retained its alliance with Duterte despite the president’s refusal to release 130 political detainees, whom he called his “alas” or bargaining chip in the peace talks, and his government’s rejection of the Red’s demand for a withdrawal of troops in the countryside in the middle of a ceasefire.  TVJ

Duterte snubs Reds’ plea to free prisoners: Too much, too soon