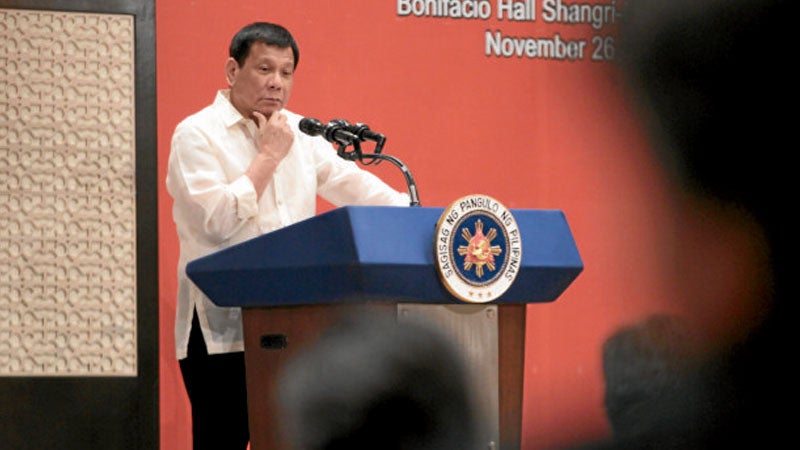 No agreement on bilateral ceasefire, no release of political prisoners.

That stance of President Duterte brought to a fragile pause peace talks between his administration and communist rebels on Monday night.

The silencing of guns and the release of political prisoners, especially aging and sickly ones, emerged at the top of the agenda of negotiations that started three months ago to end the four-decade-old communist insurgency in the Philippines.

Both sides have declared unilateral ceasefires to encourage negotiations, with the government also releasing 19 rebel consultants so they could join the talks brokered by Norway.

But the National Democratic Front of the Philippines (NDFP), representing the Communist Party of the Philippines and its armed wing, the New People’s Army, has demanded the immediate release of 130 political prisoners on humanitarian grounds, something the government viewed as giving too much too early.

Speaking at a Christmas tree lighting ceremony in Malacañang on Monday night, Mr. Duterte reiterated his administration’s sincerity in trying to settle the communist insurgency peacefully.

Mr. Duterte said, however, that he could not free communist rebels doing time in prison for criminal offenses.

“They’re asking for the release of 130 political prisoners. I told them, ‘I cannot give you that.’ I’m sorry, but I have already conceded so much on the side of the government,” he said.

But Mr. Duterte added that he was ready to free sickly and aging political prisoners.

“If they are ready to be released and accepted by the families, I will release them before Christmas,” he said.

“There’s really no point in detaining a person who is old and sickly. It’s a very awkward feeling. I’m uncomfortable with that,” he added.

Labor Secretary Silvestre Bello III, head of the government peace panel, said on Tuesday that he met with Mr. Duterte on Monday night and received clear instructions about the political prisoners.

“Produce to me a signed bilateral ceasefire agreement and I will release them within 48 hours. You can take my word for it,” Bello quoted Mr. Duterte as saying.

“Basically, I think what he wants is a reasonable agreement, and signed, that both agree, both sides mutually agree to a ceasefire,” Abella told a news briefing in Malacañang.

He said he hoped the issue could be resolved before Christmas.

Bello and government peace panel member Angela Librado-Trinidad met with Mr. Duterte on Monday for instructions, after the President met with the NDFP peace panel chair, Fidel Agcaoli, and consultants Benito and Wilma Tiamzon in Davao City on Friday.

According to the NDFP, there are 434 political prisoners detained in prisons across the country.

The government says only 200 are eligible for release under the new guidelines laid down by the Presidential Committee on Bail Recognizance and Parole.

Of the 200, 25 are women, elderly or sick. Four were given presidential pardon last week.

“Necessary legal processes take a while, as cases are within the jurisdiction of the judiciary, an independent and coequal branch,” Dureza said.

He said the government was “appalled” that certain groups were “publicly attacking” the administration over the issue.

On Friday, the NDFP said the prisoner releases must not be seen as just a humanitarian decision, but as part of the implementation of the agreements between the two sides on safety and immunity and respect for human rights and international law.

On Tuesday, the human rights group Karapatan insisted that all political prisoners should be released unconditionally, saying the matter was not about charity but justice.

The group vowed to continue the fast started by some prisoners, their relatives and sympathizers last week after 66-year-old political prisoner Bernabe Ocasla died from a heart attack.

Two left-leaning members of the House of Representatives announced on Tuesday that they would join a nationwide fast as a response to Mr. Duterte’s rejection of the NDFP’s demand to release the political prisoners.

ACT Teachers Representatives Antonio Tinio and France Castro said in a statement that they would take part in the “solidarity fasting for freedom” that would run up to Dec. 10, International Human Rights Day. —WITH REPORTS FROM MARLON RAMOS, DONA Z. PAZZIBUGAN AND DJ YAP