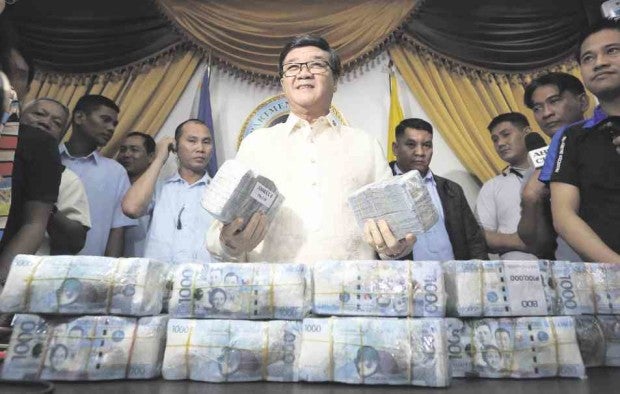 Justice Secretary Vitaliano Aguirre poses with P30 million allegedly given by gambling tycoon Jack Lam to two officials of the Bureau of Immigration. The two officials turned over the money after the story of alleged extortion on Lam was exposed. INQUIRER

Justice Secretary Vitaliano Aguirre II on Wednesday said he had ordered the relief of acting Bureau of Immigration (BI) intelligence chief Charles Calima over his alleged involvement in the extortion from gambling tycoon Jack Lam in exchange for the release of overstaying Chinese nationals.

Aguirre’s order came a day after he recommended to President Rodrigo Duterte the termination of two BI assistant commissioners, Al Argosino and Michael Robles, who allegedly extorted P50 million from Lam in exchange for the release of 600 out of 1,316 arrested Chinese nationals working illegally in the country.

Aguirre said he was not able to meet or talk to Calima after he released the relief order.

Argosino and Robles, fraternity brothers of Duterte and Aguirre, denied demanding money from Lam as alleged by Inquirer columnist Mon Tulfo and claimed they accepted it as part of their supposed investigation of corruption in the agency.

In Tulfo’s column, Calima was mentioned to be present during the payment of the P50 million to the two commissioners. CBB

ADVERTISEMENT
Read Next
AWOL cop shot dead in Pangasinan drug bust
EDITORS' PICK
DILG to stranded workers: ‘Stay where you are’ until Luzon-wide quarantine is over
DILG says middle class will also get govt aid during Luzon-wide quarantine
IATF: Food firms to operate with 50% of workforce during Luzon quarantine
UP-PGH wards for COVID-19 patients finished in 5 days
Cebu City closes its borders
Style and music journeys with Claudia Barretto
MOST READ
Locsin blasts DOH for blocking entry of Chinese doctors
Another doctor dies due to COVID-19 in Cebu City, doctor-husband critical
DOH pressed to expand, speed up virus testing
No more bread? Company forced to limit production
Don't miss out on the latest news and information.