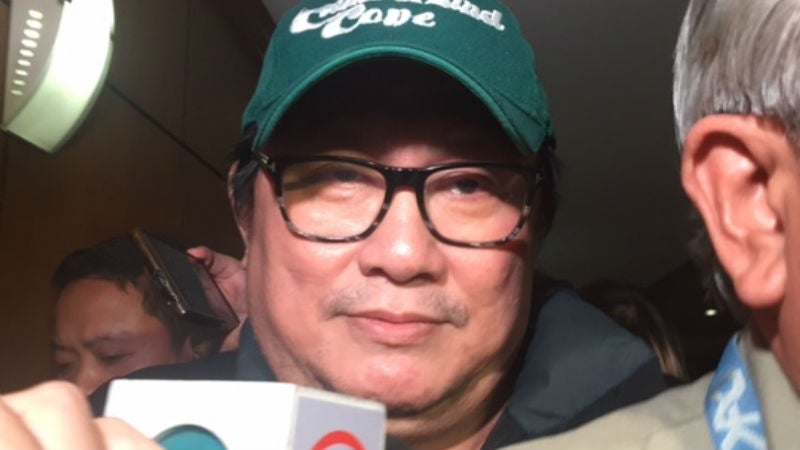 Wally Sombero surfaces at NBI to clear his name after Justice secretary Aguirre tagged him in bribe try. Photo by Aie Balagtas See

Everything was caught on camera.

Or so said sources from the Department of Justice (DOJ), who showed the Inquirer copies of the camera footage of a casino mall in Parañaque City showing two assistant commissioners of the Bureau of Immigration (BI) receiving five paper bags, allegedly containing P10 million each, from Wally Sombero, a former police colonel linked to gambling tycoon Jack Lam.

“The cash bundles were so heavy that one of the paper bags got ripped,” said the DOJ sources, who showed copies of video footage and still frames dated Nov. 26 and 27.

Sombero and the two commissioners were seen walking to a restaurant inside the mall. The restaurant’s name has been withheld upon the sources’ request.

Initially, Sombero carried only two paper bags as he and the BI officials walked around the mall toward a couch in the middle of the restaurant. The commissioners sat first. Sombero, meanwhile, placed the paper bags under the table close to their feet.

The three men talked for a few seconds. Then, Sombero left again. This time, according to the source, to get three more paper bags that would contain P30 million. It took Sombero several hours to return and prepare the money.

A still frame showed one of Sombero’s friends fixing the paper bags after one of them got ripped while containing the cash bundles.

When Sombero came back to the restaurant, he was with two other men wearing polo shirts. They assisted him in carrying the paper bags.

The next still frame showed Sombero, the BI officials, and the two men close to an elevator door at the parking lot, leaving the mall with the paper bags.

These associate commissioners as well as intelligence chief Charles Calima Jr. have been given 24 hours to disprove allegations that they extorted P50 million from a gambling tycoon in exchange for the release of overstaying Chinese nationals.

BI Commissioner Jaime Morente said his directive is separate from the probe of the National Bureau of Investigation ordered by Justice Secretary Vitaliano Aguirre II.

“We will support this and any other parallel investigation on the matter,” Morente said.

Tulfo did not name Argosino and Robles in his column but he identified the two BI officials as Duterte’s fraternity brothers.