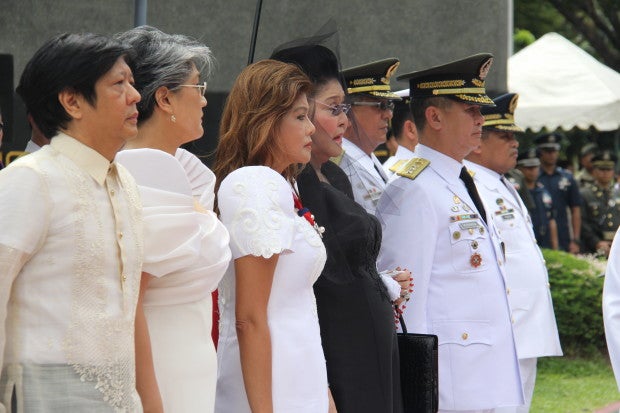 Former Bayan Muna Representatives Neri Colmenares and Satur Ocampo and other martial law victims on Monday asked the Supreme Court to cite the Marcos family and the military in contempt for the sneaky burial of the former dictator Ferdinand Marcos sans finality of the decision.

In a 17-page petition for contempt, the petitioners, through counsel National Union of Peoples’ Lawyers (NUPL), said that aside from a fine, they urged the high court to require the respondents to reimburse all the public funds used for the burial.

READ: Marcos family, AFP must be cited in contempt—lawyer

The petitioners also urged the high court to detain or imprison the respondents until they have satisfactorily cleansed themselves of the contemptuous act or until such further orders of the Court.

Petitioners said the conspiracy between the Marcos family and the military for the “shady” burial of Marcos only showed their lack of faith in the Supreme Court and an expression of disrespect and ridicule for the judicial process.

“The hasty, shady and tricky Marcos burial or interment at the Libingan ng mga Bayani (LMNB) violates doctrines of law that are not only clearly established in the Philippine legal system but are also so elementary. In doing so, the Respondents could not have but acted in evident bad faith and contempt of this Court’s jurisdiction,” the petition stated.

Petitioners maintained that the Supreme Court decision voting to dismiss the petitions against the Marcos burial is not yet final and executory considering they have 15 days under the Rules of Court to seek a reversal of the ruling. The 15th day would fall on Nov. 26.

Finality of the judgment only becomes a fact if no motion for reconsideration has been filed.

Petitioners reminded the high court that jurisprudence has shown its displeasure with the implementation of a non-final and executory decision.

The petitioners urged the high court to reissue a status quo order pending finality of its decision. No action was taken regarding the motion. Marcos was buried at LNMB last Friday. RAM/rga

Read Next
Ramos: Imelda knew everything about martial law; Imee was no baby
EDITORS' PICK
WHO says not to use ivermectin on COVID-19 patients
Harry Roque in hospital for COVID-19 treatment
Pru Life UK receives four golden arrows for solid corporate governance
PH’s COVID-19 active cases reach over 190k after 12k new infections reported
Pre-order the new vivo Y20s [G] to get a free TWS earphone
Speed up your game with the new vivo Y20s [G]
MOST READ
Stop ‘creeping occupation’ of ‘militia’ boats in WPS, Pacquiao asks China
Bea Alonzo clarifies status of her relationship with Dominic Roque
Convicted former aide of Sen. Bong Revilla dies — BuCor
Locsin to China: ‘Then move out’
Don't miss out on the latest news and information.