Ramos: Imelda knew everything about martial law; Imee was no baby 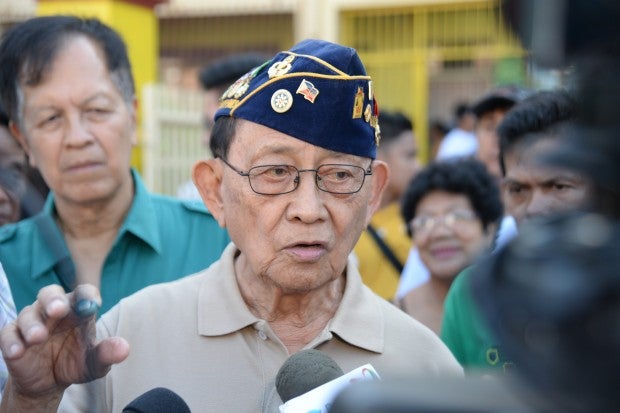 In this May 9 photo, former President Fidel Ramos talks to reporters after voting in Asingan, Pangasinan. —CONTRIBUTED PHOTO

Former President Fidel Ramos on Monday criticized the family of deposed tyrant Ferdinand Marcos for playing innocent and refusing to apologize for the atrocities committed during the regime.

Ramos was reacting to the remark of the late dictator’s eldest daughter, Ilocos Norte Gov. Imee Marcos, who chided Ramos for the abuses during the martial law era and said she was “too young” at the time to make a legal admission of guilt.

Ramos served as chief of the Philippine Constabulary, predecessor of the Philippine National Police, who helped Marcos plan the martial rule. But in a press conference on Feb. 22, 1986, Ramos and then defense minister Juan Ponce Enrile announced their break from the dictator.

“That’s a funny story. When she (Imee) said that they were still young, in fact she said ‘maliliit pa kami ng mga bata’ in Tagalog, I know how old she is because she is one year older than my eldest daughter,” Ramos said at a press conference in his office in Makati City.

“Within a few years after the proclamation of the martial law, Imee was elected, in quotes, ‘president of the Kabataang Barangay.’ So was she a little baby or a little musmusin? Of course not. She was a responsible person,” Ramos told reporters.

“But in terms of the apology that I requested, it was from the mother, the head of the family, who knew everything, including the beginning of martial law, the good years before martial law, including what must have happened in August 1983,” he said.

Reacting to Imee’s comment, Ramos said the role he played in the historic 1986 Edsa People Power revolt that toppled the dictatorship was his atonement and “more than an apology” for his sins.

“I hope you people will remember your history. My apology was more than an apology. In the Christian tradition, you confess and then you atone. My atonement was leading the military and the police during the Edsa People Power Revolution from the 22nd to 25th of February in 1986. I stand by that record. It’s there in the history books,” the former President said.

“Our atonement at that time was we were ready to die—sacrificing life, family, and future. We laid it on the altar of our nationhood, and said take it away, because what were the odds? Marcos was the overwhelming force. They had the weapons, the chain of command, chief of staff of the Armed Forces under him. And so that was our atonement. Patay kung patay,” he added.

The Marcos patriarch was buried at the Libingan ng mga Bayani last Friday in a secrecy-shrouded ceremony that sparked protests in various parts of the country. Earlier this month, the Supreme Court junked all petitions against President Rodrigo Duterte’s directive to bury Marcos at the heroes’ cemetery as part of his campaign promise, despite strong opposition from martial law victims, rights advocates and the general public.

Marcos’ burial at the LNMB, which saw full military honors including a 21-gun salute, came 30 years after he was toppled in the historic and military-backed Edsa People Power Revolution that ended his two-decade regime, which was marred by human rights abuses and corruption./rga