To his last moment above ground, the deposed strongman settled his affairs in secrecy.

Behind shut gates and away from public view, former President Ferdinand Marcos was buried with military honors at the Libingan ng mga Bayani at high noon Friday, leaving a nation shocked at his “sneaky” interment.

The media and the public were barred from entering the LNMB as rites went on at the hallowed grounds, held despite pending reconsideration pleas at the high court against his burial.

A handful of Marcos supporters carrying Philippine flaglets rejoiced as they heard the sound of a 21-gun salute from inside the cemetery, signaling that the interment was already underway.

Police and navy officers lined streets leading to the heroes’ cemetery and fortified the gate, though it was apparent there was no cause for concern. 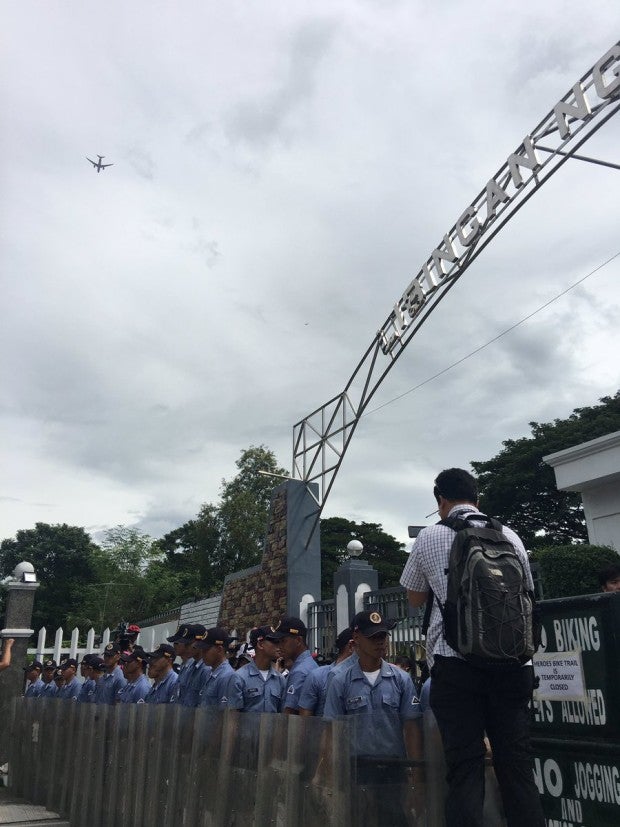 Police watch over the premises of the Libingan ng mga Bayani in time for the burial of former President Ferdinand Marcos. TARRA QUISMUNDO/PHILIPPINE DAILY INQUIRER

Only a lone protester, Nicole Aliasas, 22, managed to get close.

In the rush of the rites, no group, not those for long protesting the injustices of Marcos’ martial rule and his unsettled sins, were able to muster mobilizations.

“He should not be buried here. There’s no law that says he should be… I was surprised, I did not expect this,” said Aliasas, a marketing associate.

She was yet to be born during Marcos’ reign but learned of the abuses in school.

“This is my right, this is what I stand for,” she told reporters, emotional as she held her left fist high before a phalanx of anti-riot officers before the cemetery gates.

“The heirs of the tyrant have even outclassed him by showing brazen contempt even for  the formal judicial and legal processes, not to mention mocking the cries for justice of the victims,” said NUPL Secretary-General Edre Olalia.

“It is consistent though with the lying, stealing & killing of the dictator: doing it with a straight face, washing hands, covering up (and) getting away with it,” he said.

He said the Marcoses and the military “should be cited in contempt of court and in contempt of the judgment of history” for going ahead with the burial despite unsettled court proceedings.

“We think that the all-time thief, tyrant, and rights violator will turn on his grave and will never lay to rest,” he said.
Notably, Marcos was buried while President Rodrigo Duterte, the first Commander-in-Chief to allow the dictator’s burial on heroes’ ground, was away. He had just arrived in Peru to attend the Asia-Pacific Economic Cooperation summit.

Mr. Duterte is a known friend to the Marcoses as his father Vicente served in the late strongman’s cabinet./rga