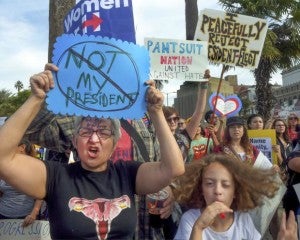 People participate in an anti-Trump protest in downtown Los Angeles on Saturday, Nov. 12, 2016. Thousands of people marched in streets across the United States on Saturday, continuing protests of Donald Trump’s election as president that started the day after his surprising victory. Several thousand people marched through downtown streets Saturday to condemn what they saw as Trump’s hate speech about Muslims, pledge to deport people in the country illegally and crude comments about women. —WALT MANCINI/The Pasadena Star-News via AP

NEW YORK — Immigrants and their advocates are taking to the streets of New York City to add their voices to those who have been marching and protesting Donald Trump’s presidential win.

Organizers say the protest scheduled for Sunday mid-afternoon in Manhattan is about speaking out against Trump’s support of deportation and other measures.

It’s the latest in days of demonstrations across the country. Other protests are expected Sunday in San Francisco and Philadelphia.

On Saturday, demonstrators gathered in big cities like New York and Los Angeles, as well as in smaller places like Worcester, Massachusetts, and Iowa City, Iowa.

In Los Angeles, an estimated 8,000 people marched Saturday to condemn what they saw as Trump’s hate speech about Muslims, pledge to deport people in the country illegally and crude comments about women.