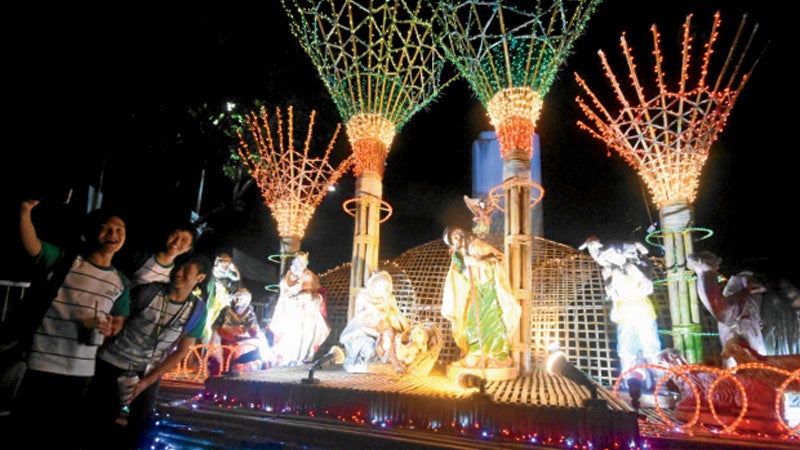 BAMBOO ART The Nativity tableau at Maria Cristina Park in front of the Tarlac provincial capitol in Tarlac City is largely made up of bamboo materials. —WILLIE LOMIBAO

PANIQUI, TARLAC—Arnold “Apple” Ballesca beamed proudly as a stream of people came out on Saturday to watch the giant “belen” (Nativity scene) that he helped build on the front lawn of the town hall here.

Since Nov. 4 when the belen was formally opened to the public, hordes of people have traveled here, making the Christmas diorama the most visited attraction in the town in the last 10 days.

“This was the first time that the town government joined the Belenismo. What you see is a product of community effort,” said Ballesca, head of the Paniqui Dance Instructors and Choreographers Association, one of the groups that volunteered for the project.

Belenismo, the art of making Nativity scenes, has become one of the most-awaited events in Tarlac province during the Christmas season since the Tarlac Heritage Foundation launched it in 2007.

In Anao town, for instance, the giant belen showed Baby Jesus lying on giant petals of ylang-ylang in a dome-shaped farmhouse. It was adorned with twinkling lights and a backdrop of “sawali” (woven bamboo slats) contoured to simulate a church.

With 10,000 ylang-ylang trees planted all over the town, Anao is known as the country’s ylang-ylang capital.

In San Manuel town, Baby Jesus was depicted in a manger protected by a roof of giant yellow corn cobs. The town is the province’s leading corn producer.

In Tarlac City, Mayor Maria Cristina Angeles decided to use water lilies, which abound in the city, for its belen.

“Instead of using plastic wrappers and fiberglass like in the last two years, we used water lilies because Mayor Angeles wanted to push this as a livelihood project in our villages,” said James Arthur Cabalu of the city tourism office.

For Anao, a fifth-class municipality (annual income: P90 million), having an attraction like the belen not only made residents feel the Christmas spirit but also made them proud as a community.

“We feel pride in being able to create it. With people from neighboring towns of Nampicuan and Cuyapo (in Nueva Ecija province) admiring our belen, you feel so happy and proud,” said May Ann Ofrecio, a government employee.

The giant belen has become a nightly attraction, with hundreds of people milling at the town’s open field as early as 5 p.m., according to Ofrecio.

Because almost everyone in the town shared his or her time, talent and resources for the project, the belen has become a symbol of unity, Ballesca said.

“The Nativity scene should remind Christians of the Holy Family and strengthen their faith in God,” he said.

He added that the belen must inspire Christians about Christ’s humility, being born in a manger because inns refused to take in his parents.