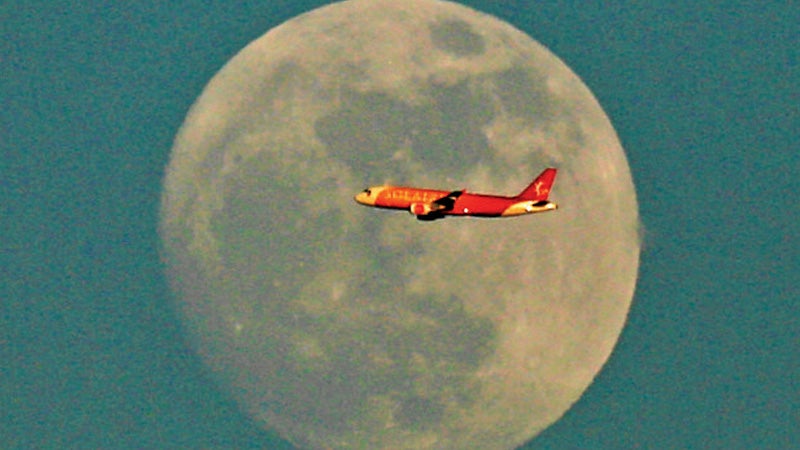 SKY SPECTACLE With a flying airplane in the foreground, the supermoon appeared from the east at 4:56:24 p.m. on Sunday in Makati City. Today, the full moon, called supermoon, will be closest to Earth since Jan. 26, 1948. The next time it will be closer will be on Nov. 25, 2034. —EDWIN BACASMAS

The Philippines can enjoy a rare “supermoon” on the night of Nov. 14 since there is no weather disturbance in the country.

Monday’s full moon, called supermoon for its larger than usual size, is not only the biggest and brightest this year but also the closest full moon in nearly seven decades.

The entire country is expected to have partly cloudy skies on Monday, so the supermoon will likely be visible, according to the Philippine Atmospheric, Geophysical and Astronomical Services Administration (Pagasa).

The moon will reach its closest point to Earth for any given month, at 7:21 p.m. on Monday, or two hours and 31 minutes
before going full moon at 9:52 p.m., Pagasa said.

“This means we’ll be seeing a closer and larger apparent diameter moon this year, a supermoon. This supermoon is one of the closest and biggest in 68 years and it won’t happen again until 2034,” Pagasa said.

In astronomy however, the event is called perigee full moon, or a full moon that is closer to Earth than average.

Both terms refer to when a full moon occurs “when the moon is within 90 percent of its closest approach to Earth in a given orbit.”

The moon doesn’t get much bigger and brighter than this. A supermoon can be 14 percent bigger and 30 percent brighter than a full moon that occurs when the moon is farthest to Earth, according to the US National Aeronautics and Space Administration (Nasa).

But it takes a real expert to notice the difference.

Nasa planetary geologist Noah Petro said that even he wouldn’t be able to see much difference in size and luminosity.

What counts, he said, was getting people “talking, thinking and caring about the moon.”

“Everyone gets to see the moon,” said Petro, deputy project scientist for the Lunar Reconnaissance Orbiter circling the moon. “It’s a great shared resource for all humanity.” —AP