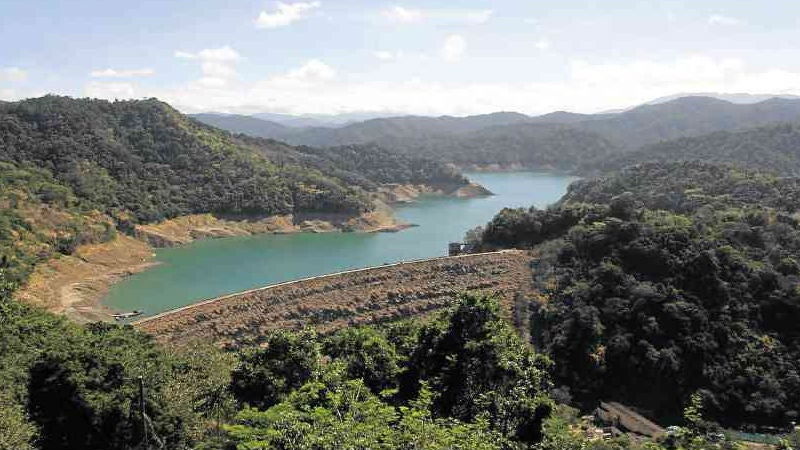 Metro Manila faces a water crisis unless the government finds a source to supplement the Umiray–Angat–Ipo or Angat reservoir system, which will not be able to meet the needs of its more than 15 million inhabitants four years from now, a private water concessionaire said.

Maynilad Water Services Inc. said the government still had no concrete backup plan for the current single supply source, which happens to sit on a fault line.

“We are at a very high risk because Metro Manila is dependent on one water source. We will have water shortage starting in 2020 when Angat cannot meet our demand anymore,” Fernandez said at a meeting between Maynilad officials and Inquirer editors and staff on Thursday night at the newspaper’s office in Makati City.

Fernandez said the issue was not only about water running out but also about the need for a “redundancy” or a reliable backup to Angat. “For example, should a major earthquake occur that will (God forbid) affect the Angat Dam and Ipo Dam water system, then Metro Manila will have no major alternate water source. It will be waterless until Angat and Ipo Dams are repaired,” he said.

Asian Development Bank (ADB) said the chance of a serious breakdown of Metro Manila’s only water source was increasing.

“This would lead to losses to the economy of Metro Manila and the Philippines, as well as potential health hazards. The poor urban population would suffer most because of their limited capacity to tap alternative water sources,” it said.

ADB said experts placed the probability of a partial breakdown in the Angat system at 20 percent, with at least one-third of its water supply to Metro Manila lost and a minimum period of two months to restore the system.

Aside from a quake, climate change was also putting more pressure on Angat to produce water for the metropolis, which has experienced a spurt in population growth, Fernandez said.

Fernandez said the regulator, Metropolitan Waterworks and Sewerage System (MWSS), which has yet to appoint a replacement for its former head, Gerardo Esquivel, should now look for another water source.

Despite the threats, the MWSS has yet to start its construction of Kaliwa Dam in General Nakar, Quezon province. The project was supposed to start in 2015 and finish by 2020 just in time for Angat’s water shortfall.

Maynilad COO Randolph T. Estrellado said MWSS had advised the company that the timetable for Kaliwa Dam’s completion had been moved to 2022.

Estrellado said Maynilad had doubts about the timetable considering the strong opposition from indigenous people in Sierra Madre whose ancestral lands would be swallowed by the roughly 10,000-hectare watershed and reservoir project.

Kaliwa Dam is expected to supply 600 million liters a day (MLD), or over a quarter of the supply from Angat.

Kaliwa Dam is just half of the water supply project, which includes Laiban Dam and Laiban Hydro-Electric Power Plant that are expected to yield 1,800 MLD.

The two dams will produce more than the 2,000 MLD currently produced by Angat. But just like Kaliwa Dam, Laiban is mired in legal, resettlement and environmental issues.

Estrellado said Maynilad would look for alternative solutions to mitigate the projected water crisis in 2020 should MWSS not be able to start the project next year. The water crisis had been sounded off as early as 2013 by then President Benigno Aquino III.

Estrellado said that if Kaliwa Dam’s completion would be pushed beyond 2022, Maynilad would have to undertake the third phase of its Putatan Water Treatment Plant much earlier than scheduled.

Maynilad has started construction of the second phase of its Putatan Water Plant in Muntinlupa, which recycles water from Laguna de Bay.

The $100-million project is expected to double its Putatan Plant output to 200 MLD.

But Estrellado said that even an additional 300 MLD from the lake would not be enough to cover the needs of its customers in 17 cities in Metro Manila and Cavite.

“We can only get so much water from Laguna Lake. The other option is a desalination plant but this is not feasible because it is expensive. It needs a lot of power to make salt water potable,” Estrellado said.

As things stand, residents of Muntinlupa, Las Piñas and Cavite have been suffering from water rationing since May (the worst stretching for 10 days in June without a single drop), as Maynilad has to cut down on supply from its treatment plant in Barangay Putatan in Muntinlupa City.

Estrellado said the plant’s filter system could not cope with the high salt content of water from the lake, especially during the summer months when water from Manila Bay enters the lake through the Pasig River.

Besides high salinity, Maynilad had been forced to shut off supply from the Putatan treatment plant because of high turbidity of water from the lake.

Maynilad is a joint venture between Metro Pacific Investments Corp., Marubeni Corp. of Japan and DMCI Holdings. The group took over Maynilad in 2007 when Benpres Holdings sold out due to debt problems. Benpres won the west zone while Ayala Corp. won the east zone in the privatization of MWSS’ water distribution functions in 1997.