They’re not early carolers, but they sing for the dead 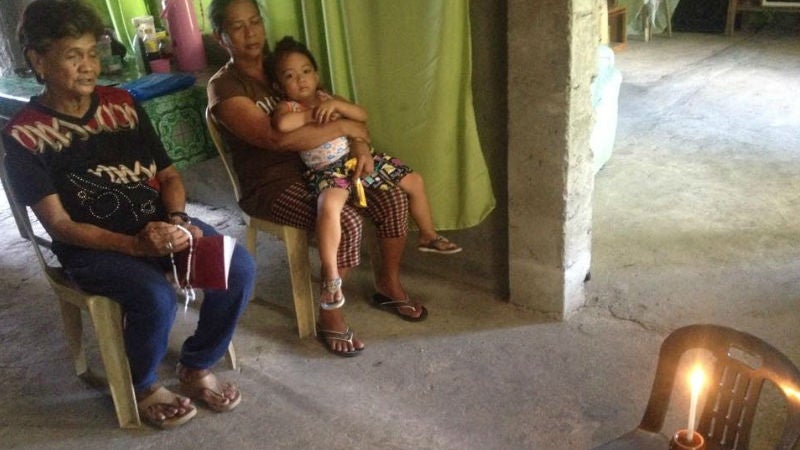 Nenita Castro (at left) leads the “Nangangaluluwa” of Barangay Balubad in Bulakan, Bulacan. She is shown here with a Bulacan family who haf asked her to join a 9-day novena for their late mother on oct. 28. Photo by Carmela Reyes-Estrope @careyestropeINQ

BULAKAN, Bulacan—Ten women from Balubad village here are knocking on doors today, the eve of All Saints Day, to share their songs for the dead.

The practice may seem odd to a young generation, which may mistake the women for very, very early carolers, said Nenita Castro, 71, who walked from house to house with her group for the traditional “Pangangaluluwa.”

“One may say this is caroling for the souls of the dead,” said Castro, who learned the craft from her mother.

According to Castro, the four songs her group brings from house to house are prayers for the dead, which are performed to make the departed’s transition to heaven easier.

Once all the songs are performed, the household offers the singers, or “nangangaluluwa,” a donation, which Castro and her group will later hand over to the church or chapels in their respective neighborhoods.

The verses, in Latin and in Filipino, are sang from memory.

Castro said she went through constant drills with her mother to internalize these songs, because her sisters declined to take up the task.

Castro said her group had also been invited to sing in Bulacan towns, like Marilao and Sta. Maria and in Malolos City.

Pangangaluluwa used to be undertaken from Oct. 30 to Nov. 1, when it was introduced during the Spanish colonial period, said Jaime Corpuz, a Bulacan historian and published author.

The days running up to Nov. 1 are always the busiest for Castro’s group because of its vast knowledge about prayers for the dead.

On Friday, they were invited to the house of Isabel San Pedro in Barangay Tibig.

San Pedro’s mother, Consuelo Bernardino, passed away on Oct. 7, 2015, and Castro’s group was asked to join the nine-day novena being conducted for Consuelo.

“It’s been the family’s practice to pray for the soul of our loved ones. My mother asked us before she died to continue praying for her soul,” San Pedro said.

On the same day, Castro was invited by an old woman in a farm to help cast away bad spirits that have been bothering her.

She said remembering the dead was a time-honored Filipino tradition that would not go away, which was why future generations would continue singing to their dead.

Read Next
In these villages, Feast of the Dead is observed for nine days
EDITORS' PICK
‘A greener, cleaner tomorrow’: A how-to guide for Filipinos who want to help with today’s energy crisis
Get exciting deals and discounts when you download the new McDonald’s App
FlipTop rapper Loonie freed on bail
Countries with confirmed cases of coronavirus
SM continues to send relief assistance to remote towns in Batangas
China expands lockdown against virus, fast-tracks hospital
MOST READ
Taal’s sulfur dioxide emission increases
No time for revelry; Tagaytay instead plans for alert level 5
Megan Young, Mikael Daez get married
Palace: US Senate move also made Duterte junk VFA
Don't miss out on the latest news and information.