In these villages, Feast of the Dead is observed for nine days | Inquirer News
Close
menu
search

In these villages, Feast of the Dead is observed for nine days 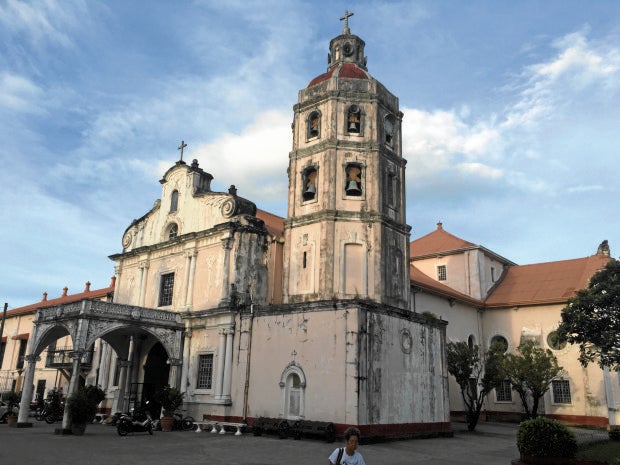 FEAST ANCHOR St. James the Apostle Parish Church in Betis, Guagua, in Pampanga province is the anchor of the Feast of the Dead that lasts nine days. —TONETTE T. OREJAS

GUAGUA, PAMPANGA—It takes nine days, not two days as most Catholics do, to observe the feast of the dead—“daun” to Kapampangan people—in the seven barangays of Betis district.

The practice has been modified over time, but three elements persist, according to Consuelo Mendoza, 84, whose clan has received three papal awards.

The eve of daun is on Nov. 1, All Saints’ Day, when an afternoon  Mass is offered at the centuries-old St. James the Apostle Parish in Betis for the “poor souls in purgatory.”

Daun officially begins on Nov. 2, All Souls’ Day. Masses are then celebrated in the church for eight consecutive days, kicking off the daily ritual of lighting candles, offering flowers and reciting the rosary at Betis cemetery.

These take place from late afternoon to the hours before midnight at the Catholic cemetery where residents from Barangays Miguel, Sta. Ursula, Santa Ines, San Agustin, San Nicolas, San Juan Nepomuceno and San Juan Bautista bury their loved ones.

Betis, one of Pampanga’s ancient settlements, has been a district of Guagua since 1903. A territory of Augustinian friars since 1572, Betis was ceded to the Diocese of Manila in 1949.

Here, the dead are never abandoned. Betis folk with day jobs send their relatives or friends in their stead to pay respects.

The high point of “daun” happens at 6 a.m. on Nov. 10 when the priest celebrates Mass right in the cemetery. Again, the prayers are intended for the souls in purgatory to finally be welcomed in heaven.

The cemetery lies 500 meters north of the church. The oldest mausoleum here belongs to the heirs of Lorenzo Pecson, Mendoza’s grandfather and one of the devout Catholics in Betis.

Before the final blessing, the priest gives this advice to the living: Keep on praying for your departed ones.

To end the nine-day feast, the priest and lay ministers go around the cemetery, blessing the tombs by spraying holy water on these.

“This novena (nine days of Masses and prayers) is unusual because it starts on Nov. 2, not before the feast,” said Msgr. Gregorio Canlas, a former Betis parish priest.

According to Mendoza, the church stopped displaying at the altar a large painting of souls being consumed by flames, one of a few daun traditions it gave up.

This visual rendition of purgatory is said to have been introduced by Fr. Fidel Dabu, the first Filipino parish priest.

Mendoza does not know where the painting was kept or if it was lost or stolen. She is not surprised by the use of images because the Bible is taught in Betis church through paintings and sculptures.

Gone also is the “tumba” that used to be placed before the major altar. Tumba was a towering structure that used to display a big crucifix of Christ. It was really two tables shrouded in black cloth.

The Mass back then was held at 5:30 a.m. After the Mass, the faithful held a slow procession from the church to the cemetery, reciting the Decenario, a long Kapampangan prayer for the dead.

Mendoza still has a copy of the “Novena Caring Caladua Qng Purgatorio (Novena for Souls in Purgatory)” originally written in Spanish by Fr. Jose March.

“We held rosaries, not candles back then,” she recalled.

Writer Nina L.B. Tomen said she had not found an archival document explaining the roots of the Betis “undas.”

What is clear is that Betis folk continue to go to the cemetery during the novena, according to Kalookan Bishop Pablo Virgilio David, a native of Betis.

The old features of the tradition began to wane in the 1980s.

Betis has changed, too. “After World War II, we were all Catholics except for one Iglesia [ni Cristo member], Marcial Ducut. Then those who worked abroad left as Catholics and returned as born-again [Christians],” Mendoza said.

Entering or leaving Betis cemetery gives one a reality check. An arc says: “Aku ngeni, Ika bukas (I’m dead now, you too will die next).”

“It was Msgr. Felipe Diaz, Dabu’s successor, who put up that arc. It reminds us we are just pilgrims and our real destination is heaven,” Mendoza said.