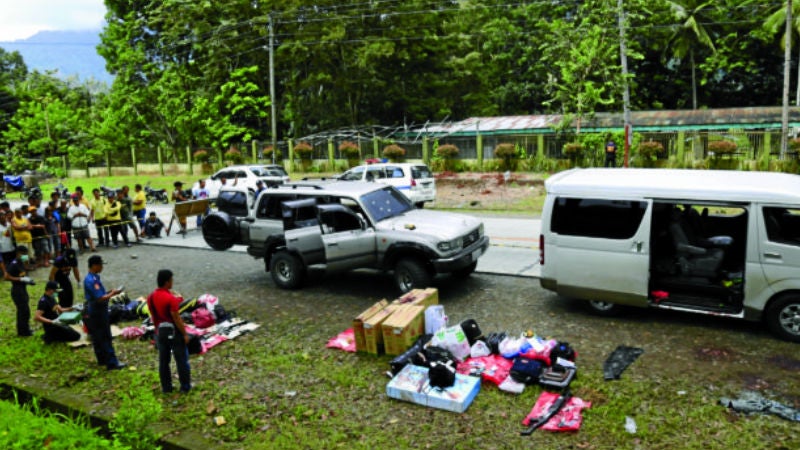 DEATH SCENE Police personnel gather forensic evidence at the scene where Mayor Samsudin Dimaukom of Datu Saudi Ampatuan in Maguindanao province was killed along with nine others in what lawmen said was an antidrug operation. —CARLOAGAMON

Relatives of Mayor Samsudin Dimaukom are seeking an independent investigation of Friday’s alleged gun battle on a national highway in Makilala, North Cotabato province, that left him and nine of his men dead.

Most of the dead were shot in the head in a possible rubout, relatives said, disputing the police account of a shootout.

Relying solely on the investigation by the police scene of the crime operatives would not bring out the truth, they added.

Police officials, however, maintained that the killings were an offshoot of a legitimate antinarcotics operation. They said Dimaukom’s group fired at the policemen at a checkpoint, prompting the lawmen to fire back in self-defense.

Nur Hafizullah Abdullah, interior secretary for the Autonomous Region in Muslim Mindanao, said the relatives could later ask for a reinvestigation if they doubted the official police findings.

Contrary to police claims that Dimaukom’s group was transporting illegal drugs from Davao City to Cotabato aboard three vehicles when they were flagged at a checkpoint, only 13 sachets of “shabu” (methamphetamine hydrochloride) were recovered from the vehicles.

Dimaukom and his wife Anida had turned themselves in to Philippine National Police Director General Ronald dela Rosa after he was publicly named by President Duterte as among more than 150 public officials involved in the illegal drug trade.

Read Next
Why do they go to Panatag? Pangasinan fishermen show their marine bounty
EDITORS' PICK
WHO says not to use ivermectin on COVID-19 patients
Speed up your game with the new vivo Y20s [G]
Pru Life UK receives four golden arrows for solid corporate governance
PH’s COVID-19 active cases reach over 190k after 12k new infections reported
Harry Roque in hospital for COVID-19 treatment
Pre-order the new vivo Y20s [G] to get a free TWS earphone
MOST READ
Stop ‘creeping occupation’ of ‘militia’ boats in WPS, Pacquiao asks China
Bea Alonzo clarifies status of her relationship with Dominic Roque
Convicted former aide of Sen. Bong Revilla dies — BuCor
Locsin to China: ‘Then move out’
Don't miss out on the latest news and information.