Ilocos residents get out of harm’s way after officials remind them of horror stories from Eastern Visayas
Inquirer Northern Luzon / 01:30 AM October 22, 2016 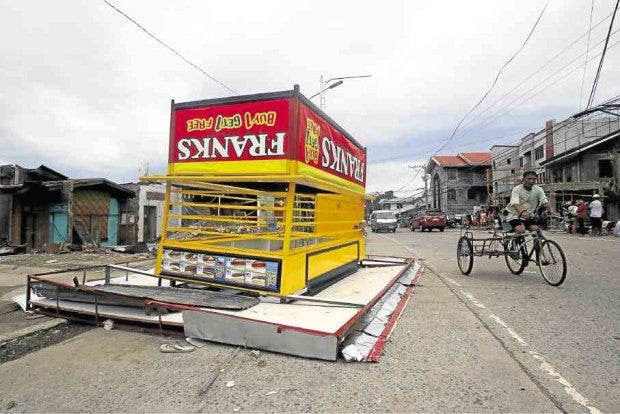 DINGRAS, ILOCOS NORTE—This town’s residents on Thursday survived the onslaught of Supertyphoon “Lawin” (international name: Haima), and that’s because they listened and learned from the stories of Tacloban City and Leyte province when these communities were flattened by Supertyphoon “Yolanda” (Haiyan) in 2013.

Most residents in north Luzon have no experience with typhoons of Yolanda’s magnitude and acted to protect their families.

“This was Yolanda minus the storm surge. [Lawin] was something new to all of us [in Cagayan Valley], something we can learn from,” said Cagayan Gov. Manuel Mamba.

Before Lawin entered north Luzon, students were no longer in schools after local officials suspended classes as early as Oct. 18 even though it was sunny that day.

Farmers were also advised to harvest their crops early.

“We are lucky. This time everybody came prepared,” said Valenzuela, even though there were holdouts in low-lying areas who had to be convinced that moving to barangay halls and schools serving as evacuation centers was the right decision.

The mayor said all that authorities had to do was cite the tragedy that befell Eastern Visayas when Yolanda struck. In Tacloban alone, more than 2,000 people died when Yolanda hit.

While fear may have frayed nerves, it also helped many people survive Lawin in Isabela province.

Jun Macapallag, 40, of Delfin Albano town, said he and his wife stayed in the toilet for eight hours, after howling winds tore off the roof of their house in Barangay Ragan Sur.

He said it was the scariest typhoon he had experienced. His children stayed with his parents in the neighboring house, which also lost its roof.

“I never feared rains, thunderclaps and storms until I encountered Lawin,” said Candy Soberano, a wife and mother of two in Laoag City.

“Typhoon Signal No. 5 was no joke. Hearing the howling winds made me tear up. I was imagining Yolanda. I saw how it damaged Samar. I would never forget the dates Oct. 19 and 20, when my faith was tested and I surrendered my family’s fate to God,” she said.

Young Ilocanos volunteered to stay and send advisories and typhoon updates online and through social media networking sites to keep people informed, before power lines and communication signals shut down.

Nothing beats human tenacity to survive. In Baguio City, rescue workers were surprised to find a family huddled in a building that once housed a bank, with their blankets and mats in tow, as well as the family dog. —REPORTS FROM LEILANIE ADRIANO, MELVIN GASCON AND VILLAMOR VISAYA