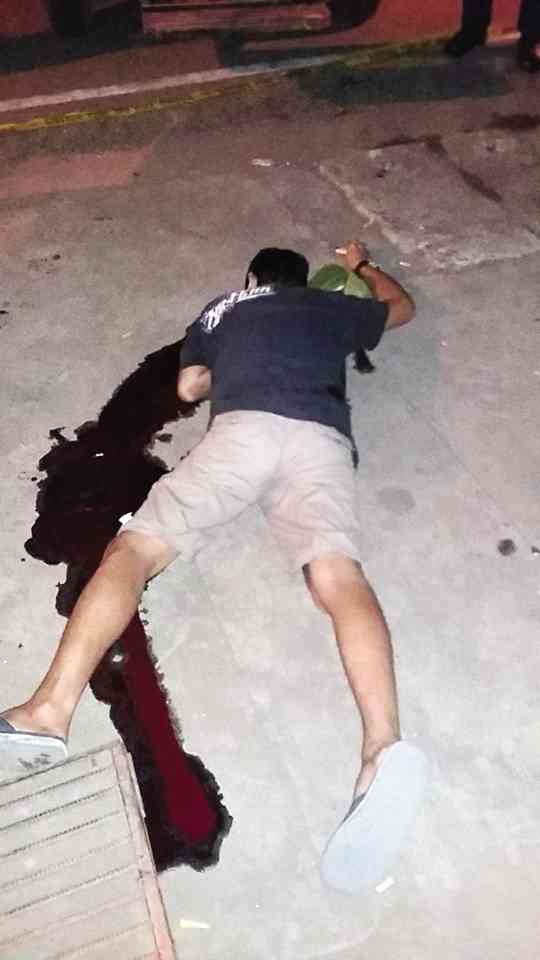 The body of suspected thief and pusher Joemarie Arroyo lies on a street in Iloilo City after he was executed, gangland-style, by motorcycle-riding gunmen. CONTRIBUTED PHOTO

ILOILO CITY—This fast-developing but still laid back city is being put on the map of places where street killings are becoming a regular occurrence following the Duterte administration’s launch of a brutal war on drugs.

Concerns were raised over two cases of killings that happened in as many nights, both perpetrated by the now all too familiar characters—suspects riding in tandem on a motorcycle and victims suspected of being criminals.

Although police have not yet established a link between the killings in Molo District on Tuesday and La Paz district on Wednesday, the cases bore similarities.

The suspects rode motorcycles, stopped in front of their victims and shot their prey in public places.

Bystanders were told to stay calm by the suspects, who seemed to have enough time to announce that they were just after their victims.

The suspects left the crime scenes calmly and police have not made any arrests.

The first case, on Tuesday, involved two motorcycle-riding assailants who shot dead a suspected thief and pusher in the village of San Pedro in Molo District.

The dead, Joemarie Arroyo, 46, died of multiple bullet wounds in the head and chest.

Senior Insp. Mark Cordero, Molo District police chief, said Arroyo was drinking at a store on the road when he was attacked.

One of the men on the motorcycle alighted and was the first to fire at Arroyo, but his gun jammed. The second man got off and started to shoot Arroyo, making sure the victim was dead.

Arroyo is a suspected thief in the community who faces several complaints, including one for stealing church donations and valuables in cars parked near the church.

According to Senior Insp. Cordero, Arroyo is also a suspected pusher.

The assailants stopped on a street corner where Caravana was seated with three others and repeatedly shot Caravana. The gunmen told the victim’s three companions to lie face down.

Caravana was brought to the Western Visayas State University Medical Center where he died.

Sumagaysay initially attributed Caravan’s killing to a feud in the drug syndicate as Caravan was reported to be planning to quit the drug trade.

The two killings had raised the number of unsolved murders in the city to three in just 12 days.

On Oct. 8, Carcar Hablo died of gunshot wounds after he was shot by motorcycle-riding gunmen in Barangay Desamparados in Jaro District.

While law enforcers might not be involved, Oso said the statements of Mr. Duterte might have encouraged the killings.

“He keeps on telling drug suspects ‘I will kill you. I will kill you’ which can be interpreted by policemen as a go-signal,” Oso said.