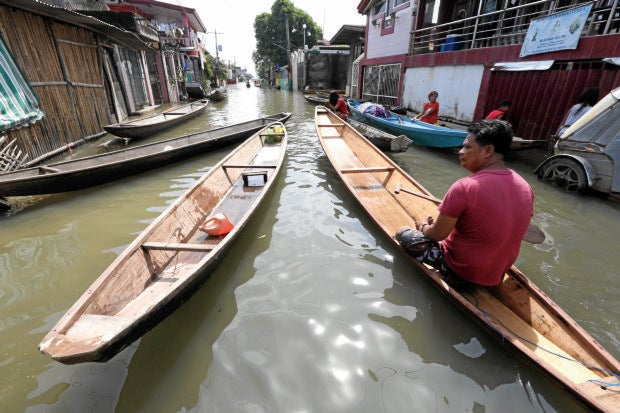 More than 40,000 people who fled their homes as Supertyphoon “Lawin” (international name: Haima)  lashed northern Luzon remained in temporary shelters on Friday, two days after one of the strongest storms to hit the country ripped through the region, leaving at least 18 dead, toppling trees and power pylons, shutting down communications and flooding wide areas.

Officials said the relatively small number of casualties from such a powerful typhoon was due partly to the early evacuation of more than 90,000 people from vulnerable communities along riverbanks and mountainsides.

Vice President Leni Robredo and Social Welfare Secretary Judy Taguiwalo flew to Cagayan on Friday to survey the damage to the province, where the typhoon made landfall.

“This typhoon is a dry run [for] our capability to respond in times of disasters, [for] our readiness to collaborate with various stakeholders, to minimize damage and make sure our people are protected and secured before, during and after a calamity,” Taguiwalo told reporters in Tuguegarao City, the provincial capital.

Lawin  slammed into Cagayan late Wednesday with 225 kph winds and gusts of up to 315, nearly as powerful as Supertyphoon “Yolanda” (international name: Haiyan) in November 2013 that left 7,300 dead in Eastern Visayas.

Romina Marasigan, spokesperson for the National Disaster Risk Reduction and Management Council, said 40,515 people were still sheltered in evacuation centers as of Friday.

Marasigan said about 30 motorcyle-riding members of rapid response teams were dispatched to isolated barangays in the Cordillera provinces to assess the typhoon damage.

In Peñablanca, a farming town of about 42,000 people, where the typhoon made landfall, aid has yet to arrive, according to Agence France-Presse (AFP).

In San Pablo, another Cagayan Valley town about 20 kilometers south of Peñablanca, four families spent Thursday night on a roadside after Lawin flattened their homes.

“No one has helped us. It is just us and other families, helping each other on the side of the road,” Jovy Dalupan, a mother of two, told AFP.

Civil defense officials said 42 road segments and four bridges in the Ilocos, Cagayan Valley, Cordillera and Central Luzon regions had been blocked by floodwater and landslide debris.  Only one, located in Tinoc, Ifugao, was cleared on Friday.

They said 65 barangays in Pampanga and Pangasinan were still under a meter of floodwater.

Disaster responders and local officials reported 18 people have been killed after Lawin barreled through Cagayan Valley and the Ilocos and Cordillera regions.

Among those killed was Rosita Rubaoa of Baggao, Cagayan, who was hit by debris from a hut that was blown away. An elderly woman, 85-year-old Aurora Cariaga, died inside her house after fierce winds tore off its roof in Pasuquin, Ilocos Norte. A landslide in Lubuagan, Kalinga, crushed Ceasar and Amelia Dua-as and their three children age 1, 4 and 6. Landslides also killed six others in Benguet province.

Marasigan said additional government relief goods from Central Visayas were flown on Friday to Tuguegarao on a military C-130 plane.

The typhoon destroyed P6.2 billion worth of crops in Cagayan and damaged P673.5 million worth of agricultural products and infrastructure in Ilocos Norte province. The Cordillera region reported agricultural losses of P26.16 million, mostly rice, corn and high-value crops.

On Friday, Ilocos Norte, Tuguegarao and Kalinga province were placed under a state of calamity.

Power has not been restored in some northern Luzon provinces although normal operations were restored at Laoag International Airport.

The typhoon churned toward China where officials suspended rail services in several provinces on the mainland’s south, where the typhoon was expected to make landfall. Authorities in Shenzhen ordered schools, markets and factories closed, halted public transportation and evacuated some areas.

Hong Kong hunkered down as Haima lashed the financial hub with rain and wind gusts of up to 109 kph. Schools and offices were shut, trading on the stock market suspended and commuter ferry services halted. More than 740 flights to and from the city’s international airport were canceled or delayed.  —WITH REPORTS FROM JEROME ANING, JAYMEE T. GAMIL, JEANNETTE ANDRADE, DEXTER CABALZA, MELVIN GASCON, LEILANIE ADRIANO, VINCENT CABREZA, AFP AND AP