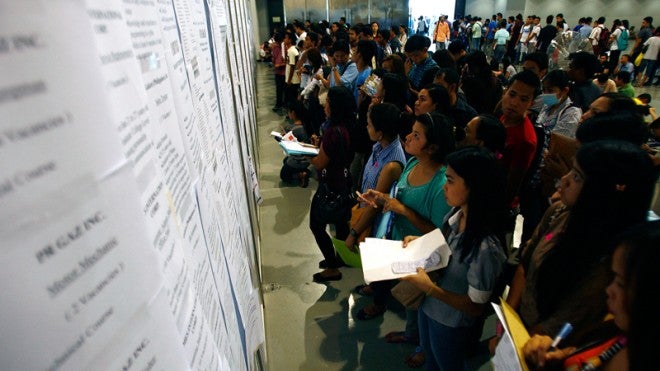 Filipinos want the Duterte administration to focus on increasing workers’ pay and creating more jobs, according to the latest survey by Pulse Asia.

The poll, conducted from Sept. 25 to Oct. 1, found that most Filipinos regard improving salary and job generation as the most urgent national issues that the government must address with 46 and 38 percent, respectively.

Increasing workers’ pay was also the leading first-mentioned urgent national issue (19 percent) and the only majority urgent national issue across geographic areas and socio-economic groupings, which was cited by more than half (53 percent) of those belonging to the poorest class E. It was the most often cited urgent concern in the rest of Luzon and Class D, Metro Manila, and the Visayas.

Controlling inflation (37 percent), fighting graft and corruption in government (32 percent), and reducing poverty of many Filipinos (32 percent) were also deemed important concerns by the respondents.

Pulse Asia said the level of public concern for various issues between July and September 2016 were “essentially constant,” except the drop in the percentage of Filipinos who identified criminality as an urgent national concern (-21 percentage points).

Pulse Asia said Filipinos in all geographic areas and socioeconomic classes were least concerned about preparing to successfully face any kind of terrorism (5 percent), defending the integrity of Philippine territory against foreigners (5 percent), and amending the 1987 Constitution or Charter change (2 percent).

Earlier results released by Pulse Asia showed most Filipinos trust and approve of President Rodrigo Duterte and his accomplishments in his first three months in office with 86 percent, five points down from the rating he got in July. JE/rga