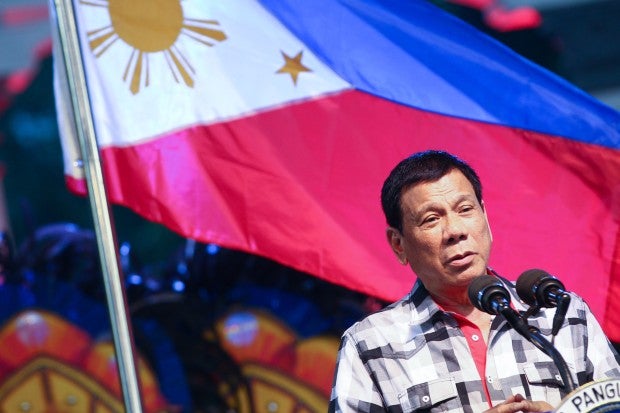 President Duterte extending apologies to the Jewish community, in a speech at the MassKara Festival in Bacolod City on October 2. ACE MORANDANTE/ Presidential Photo

The first Social Weather Stations survey to measure public satisfaction of presidential performance in the Duterte era found that three-fourths (76 percent) of voting-age Filipinos declared themselves satisfied with President Rodrigo Roa Duterte. About a tenth, or 11 percent, of respondents said they were dissatisfied, while 13 percent were undecided. The results of the September 24-27 survey were released through BusinessWorld, which partners with SWS.

In SWS terms, President Duterte’s net satisfaction rating in the first quarter of his term (percent satisfied minus percent dissatisfied) was 64 percent (rounded off) — “very good” in the SWS classification system and the second highest among post-Edsa presidents.

Gloria Arroyo, who came to power after Estrada was ousted in 2001, received a net rating of 24 percent, which SWS classifies as “moderate.”

SWS found that the first president from Mindanao enjoyed “excellent” support in Mindanao, with 88 percent satisfied and only 4 percent dissatisfied, for a net rating of 85 percent (rounded off). Mr. Duterte earned “very good” net ratings in the other major geographical blocs: 62 percent in the Visayas, 58 percent in Metro Manila, 57 percent in “balance Luzon.”

The SWS polling organization noted that another survey it conducted on June 24 to 27 measured the President’s net trust rating at an “excellent” 79 percent.

Pulse Asia, the other major survey organization, estimated President Duterte’s trust rating at 91 percent, as determined by its survey conducted from July 2 to 8, or just days after the presidential inauguration.

The Duterte administration marks its 100th day in office on October 8, Saturday.—JN