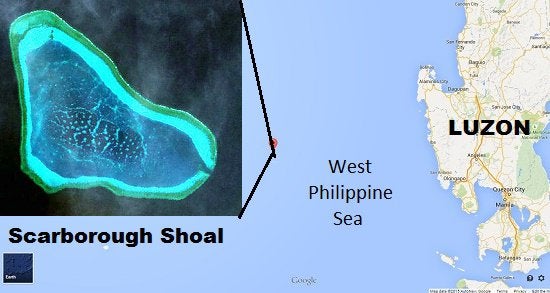 A visit by the Philippine Navy to the disputed Scarborough Shoal or Bajo de Masinloc in Zambales in September showed no reclamation activities in the area, a defense official told a Senate hearing on Monday.

“Actually upon hearing Governor (Hermogenes) Ebdane stating that there was no reclamation at Bajo de Masinloc, we confirmed from Nolcom (Northern Luzon Command ) about this information and the Philippine Navy went there last Sept. 18 and they found four Chinese Coast guards and two fishing vessels. There was no reclamation,” Del Rosario said.

Ebdane is a former Zambales governor accused of selling two mountains in the province supposedly to build a 3,500-hectare Chinese island near the Scarborough.

Ebdane, who was at the hearing, denied the allegations against him.

“First, I can’t sell something that is not mine and over which I have no authority. Second, the so-called presence of the Chinese military is ridiculous. Perhaps an overflight by the Philippine Air Force can confirm the veracity of the same. And third , there is no reclamation activity by the Chinese in Bajo de Masinloc,” the former governor said.

Ebdane’s successor, Governor Amor Deloso, admitted that he had no personal knowledge of any reclamation at Scarborough and that his previous statements were based on newspaper reports and information given to him by his sources.

“I confess your honor I have no knowledge about all this reclamation. My point of having 3,500 hectares reclaimed near Scarborough was part of a front page news in the Daily Inquirer two weeks before the election… but as to whether these were true or not is beyond my personal knowledge, your honor,” Deloso said.

Committee chair Sen. Richard Gordon admonished Deloso, noting that the latter’s statements about the alleged reclamation activity in Bajo de Masinloc were also made before the committee.