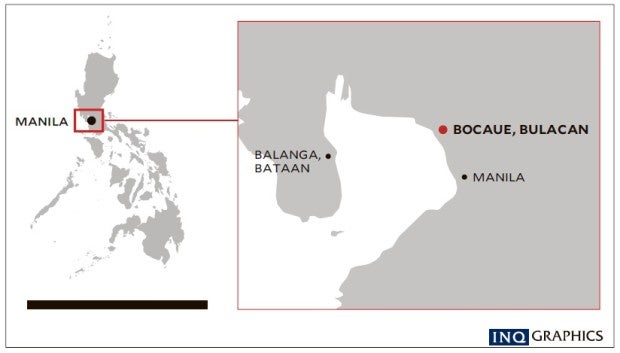 BOCAUE, BULACAN—Work has started here to dredge the Bocaue River for the next six months to reduce flooding in Bulacan towns lying on natural catch basins of a major Central Luzon river system.

The project to clean the Bocaue River was launched on Saturday by Sen. Joel Villanueva, who lives in this town.

The silted Meycauayan-Marilao-Obando river system, which includes the Bocaue River, has caused the perennial flooding in Central Luzon region, especially in the Bulacan towns of Hagonoy and Calumpit.

On Villanueva’s request, Public Works Secretary Mark Villar sent a dredging machine to Bocaue to dredge portions of the river.

Last month when Typhoon “Helen” struck, the stretch of the MacArthur Highway from Bocaue to the Meycauayan City was submerged under .91 meters (3 feet) of water, rendering it impassable to light vehicles and stranding commuters.

Government studies showed that water from the Sierra Madre mountain ranges cascades down to San Jose del Monte City, then flows to Sta. Maria and Marilao towns and Meycauayan City, before it reaches Obando and Bulacan towns through the Bocaue River. The water then discharges into Manila Bay.

Because Bocaue River is heavily silted, water tends to rise and spill into communities for days during the monsoon season.

Antonio Molano, regional director of the Department of Public Works and Highways (DPWH), informed Villanueva that the dredging machine could dig up as much as 16 meters (52.49 feet) of silt. It would continue dredging operations until March 2017.

Villanueva said the dredging project would be funded by his office, the DPWH and the town government of Bocaue.

“The coastal areas in Central Luzon, particularly those in Calumpit and Hagonoy, have suffered too long from floods which several administrations have failed to correct,” he said.

Marilao and Meycauayan have been undertaking their own dredging programs, which would be coordinated with the cleanup of the Bocaue River, Molano said.

He said P116 million has been allocated in the proposed 2017 national budget for flood control projects in six villages of Bocaue. —CARMELA REYES-ESTROPE