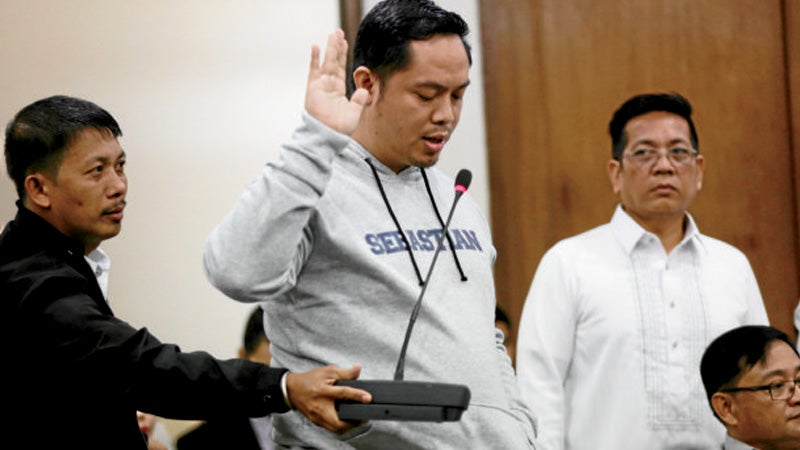 Wearing a gray hooded sweatshirt, Sebastian read at the resumption of the House hearing on the proliferation of drugs at New Bilibid Prison (NBP) his 12-page affidavit in a polished, schoolboy manner that contrasted with his stature as a feared drug lord.

The 36-year-old college dropout said he contributed a total of P10 million from March to May 2015 for De Lima’s senatorial bid in May, coursing it through her then security aide, Joenel Sanchez.

Claiming that De Lima and Sanchez were lovers, Sebastian said that a few days before Christmas 2014, he gave Sanchez P2 million inside his office in NBP.

The next day, Sanchez called him and put the phone on loudspeaker where a woman who sounded like De Lima greeted him “Merry Christmas.”

“I answered, ‘Merry Christmas, too, Ma’am. Did you receive my gift?’ To which the secretary replied, ‘Yes, Jaybee, Merry Christmas,’” Sebastian said.

Sebastian said that on Jan. 8, 2015, he received a text message from Sanchez telling him that De Lima was on her way to NBP for a command conference and prepare money for her election campaign. Sebastian said he had P2 million and placed it in a paper bag.

While waiting for the meeting, a grenade was thrown at him, leaving one dead and 19 others injured, he said.

On her arrival, De Lima asked the gang leaders to find out who threw the grenade or be placed in solitary confinement, except for him.

Sebastian said he was then summoned to the office of then Bureau of Corrections (BuCor) Director Franklin Bucayu to meet with De Lima where he appealed to her not to punish the commanders. De Lima agreed.

When he was about to leave Bucayu’s office, Sebastian said he asked De Lima if he should just give the P2 million in his paper bag to Sanchez. De Lima reportedly replied that Sanchez was not with her.

“Just leave it there,” De Lima told him in Filipino, Sebastian claimed.

De Lima denied Sebastian’s claim, saying he had been forced to testify against her in fear for his life. (See story below.)

Curiously, Sebastian said the raid led by De Lima on Dec. 16, 2014, was the start of a difficult time that he and his family had been having.

“I had been accused of giving authorities information that led to the raid and the transfer [to the NBI] of the so-called Bilibid 19,” Sebastian said, referring to the top drug lords at the penitentiary.

He denied that he was a government “asset,” contrary to a recent claim by De Lima.

The Bilibid 19 included his former friend and now his worst enemy, Herbert Colanggo, also known as Ampang, who had testified that drug lords had transformed NBP into a “Little Las Vegas” and the center of a multibillion-peso trade in “shabu,” the poor man’s crystal meth.

The raid ended the supposed glory days of Colanggo, who ran the shabu trade inside NBP allegedly to the point of having the wives of inmates killed if they were unable to remit shabu sales.

Aside from bringing in almost all the contraband—from firearms, to women, alcohol to gambling—Colanggo was allowed to hold weekly concerts, allow the entry of several trucks of beer and entertainment celebrities, like Sharon Cuneta. 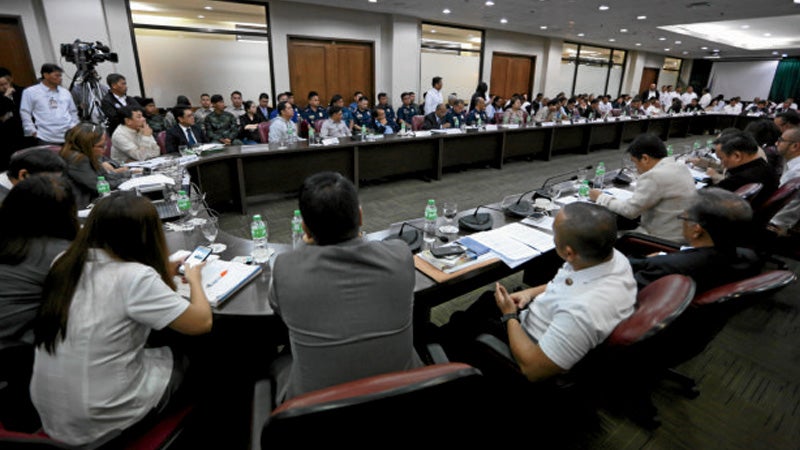 Colanggo, according to Sebastian, also claimed that he had strong links to De Lima because she belonged to the Liberal Party, like his girlfriend, Vice Mayor Nova Parojinog, and her father, the mayor of Ozamiz City.

“We had many Chinese high-profile inmates involved in the selling of shabu. They can freely deal with anyone and they can freely transact inside Bilibid using their cell phones,” he said.

He said shabu came from China and North Korea. “Almost all the Chinese drug lords do business with the Filipino drug traders from Luzon, Visayas, and Mindanao who are detained at the maximum security compound,” Sebastian said.

He also named an inmate, former Chief Insp. Clarence Dongail, as the one helping authorities arrest Chinese or Filipino drug traders outside NBP.

Pressed for more details about the NBP personnel involved, Sebastian said he could provide a list but would not mention them publicly.

The House justice committee cited Ronnie Dayan, De Lima’s driver, bodyguard, alleged bagman and lover, in contempt for ignoring summons to appear. An arrest warrant will be issued against him.

Renante Diaz, talent manager of Colanggo, testified he handed over P3 million in monthly payoffs to Sanchez and Dayan from October 2013 to November 2014, and P1 million whenever a concert was held at NBP.

He said he also gave money to BuCor officials so they would allow performers and prostitutes to be brought in during Colanggo’s shows, as well as expensive gadgets, appliances including cell phones, and alcohol.

Diaz said he was also ordered to give P150,000 to P500,000 monthly to then Justice Undersecretary Francisco Baraan through Department of Justice employee Susan Francisco in exchange for the approval of Colanggo’s request to transfer Chinese inmates from the Iwahig penal colony to NBP.