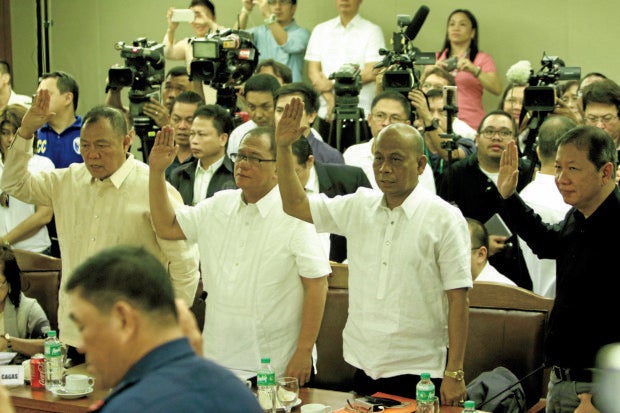 National Bureau of Investigation (NBI) deputy director Rafael Ragos on Monday said he delivered several sums of money on different occasions to the house of Sen. Leila De Lima upon the instruction of the latter’s former driver and alleged lover Ronnie Dayan.

In his testimony during the House probe on drug proliferation in the national penitentiary, Ragos also noted the “intimacy” between De Lima and Dayan, saying their relationship “goes beyond that of an employer and employee.”

“I had no choice but to say yes to Mr. Dayan because I know how close he is to Sec. De Lima. I am a frequent visitor to the house of Sec. De Lima in Parañaque and her office on Padre Faura and even their house in Bicol so I was able to observe their behavior and intimacy towards each other,” Ragos said in his affidavit.

Ragos said he received millions of pesos from certain individuals namely a certain Jorge Goff, Jovencio Ablan Jr., and a relative of one German Agojo which he turned over to Dayan in De Lima’s Parañaque residence.

Ragos said he was privy to such transactions because De Lima trusted him.

“In fact, whenever she would celebrate her birthday, I would volunteer to shoulder the expenses for the services and food provided by the caterer. During Christmas seasons, I would decorate her house with Christmas decors,” he said.

“I would likewise contribute to her events such as giving sacks of rice for her gift giving activities in Bicol during Christmas season. I also spent cash as gift to indigents. My family and I would also visit her house in South Bay Village, Paranaque and even her house in Bicol,” Ragos added.

Ragos said De Lima “would normally respond with a nod” to the requests of inmates for celebration inside the major prison facility, which he would “casually mention” when he had the opportunity. JE/rga