Moderator Lester Holt under scrutiny during US presidential debate 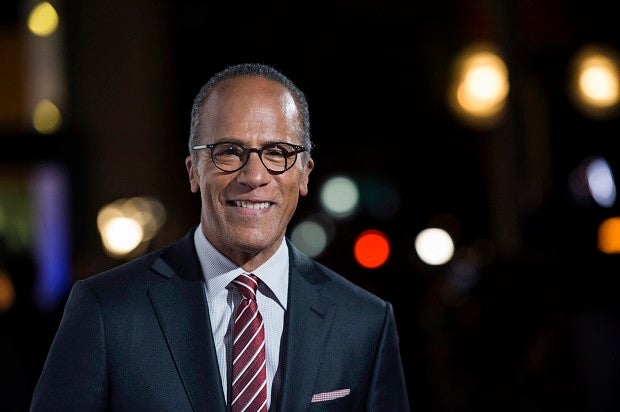 NEW YORK — Everyone’s aware of the stakes for Hillary Clinton and Donald Trump during the first presidential debate, but there’s a third person in the equation who faces a different pressure: Lester Holt.

The NBC News veteran is moderating his first general election debate, making him solely responsible for the questions asked each candidate and for steering the conversation. His performance will be closely watched, particularly in light of a dispute over the extent to which he should call politicians out for making untrue statements.

Holt, 57, has kept quiet about his preparations. The NBC “Nightly News” anchor took over his job last year after predecessor Brian Williams was found to have lied about his role in news stories.

Like the moderators for all three presidential debates this fall, it’s Holt’s first time in that role for a general election debate. He hosted a Democratic primary forum in January, and has interviewed Clinton and Trump three times each during the campaign.

In a reflection of the attention that will be paid to Holt, his voter registration became an issue last week.

“Lester is a Democrat,” Trump said in a Fox News Channel interview. “It’s a phony system. They are all Democrats.”

Holt, however, is a registered Republican, according to New York state voting records.

Asked about the misstatement on Monday, Trump campaign manager Kellyanne Conway said on MSNBC that it wasn’t a lie because Trump didn’t know Holt’s voter registration.

Voting records show that Anderson Cooper of CNN, who is moderating the Oct. 9 debate, is registered unaffiliated with a party in New York and Chris Wallace of Fox News, the moderator on Oct. 19, is a registered Democrat in Washington, D.C. Martha Raddatz, who will join Cooper, lives in Virginia, which doesn’t register voters by party, and ABC would not discuss her affiliation.

That illustrates on a small scale the issue of to what extent moderators, and journalists covering the debate, should point it out when a candidate says something untrue. It became part of the pre-debate discussion when Holt’s NBC colleague, Matt Lauer, was criticized for not confronting Trump earlier this month when the Republican falsely claimed he had not expressed support for the war in Iraq during a forum between the two candidates.

Janet Brown, executive director of the Commission on Presidential Debates, said on CNN Sunday that in past debates moderators have generally believed the candidates should call their opponents out when something false is said.

“I don’t think it’s a good idea to get the moderator into essentially serving as the Encyclopedia Britannica,” Brown said.

Television networks were skittish Monday in discussing their fact-checking plans in advance. None admitted in advance to plans of flashing graphics onscreen to identify a false statement; that hasn’t been done in the past. NBC News said it is teaming with PolitiFact for digital fact-checking. CBS said it will assign fact-checkers that will provide context during the debate on the CBSNews.com web site. In past years, some networks have assigned reporters post-debate to examine the accuracy of particular statements.

The television industry will be watching to see if Monday’s debate can smash the previous record for the biggest presidential debate audience, the 80.6 million people who watched the only debate of the 1980 campaign between Jimmy Carter and Ronald Reagan. The most-watched debate this century was the first between Barack Obama and Mitt Romney in 2012, with 67.2 million voters, the Nielsen company said.

During his television journalism career, Holt has been known more for hard work than flashiness. He was a news anchor in Chicago for 14 years before coming to NBC in 2000, and logged long hours on MSNBC during the Iraq War.

The bass guitar is his off-screen passion. Last week he set aside debate prep to play during a Manhattan rooftop party for “Dateline NBC,” joining some fellow NBC employees running through songs by Alabama Shakes, Billy Squier and Jefferson Starship.