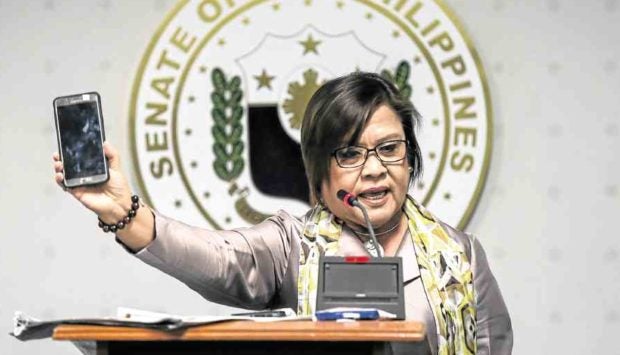 Cavite Rep. Strike Revilla, brother of former Sen. Ramon “Bong” Revilla Jr., said it was only karma that Senator Leila De Lima faced a congressional inquiry for being purportedly linked to drugs in the Bilibid.

In a statement, Rep. Revilla said De Lima should stop complaining because it was only karma that she is facing the allegations now.

Rep. Revilla said it serves De Lima right after also coming up with “fabricated” accusations against former President and now Pampanga Representative Gloria Macapagal-Arroyo when she was justice secretary.

In 2011, De Lima included Arroyo in the Department of Justice (DOJ) watchlist order, preventing Arroyo from seeking treatment abroad while the justice department was investigating her.

“Senator Leila De Lima should stop whining because after all, as a former Justice Secretary she was responsible for fabricating charges against former President Gloria Arroyo. That’s karma in action as far as I am concerned,” Rep. Revilla said.

It was also during De Lima’s stint at the DOJ when former Sen. Revilla was investigated and charged for plunder for allegedly earning P224.5-million kickbacks from his Priority Development Assistance Fund in the scam of businesswoman Janet Lim-Napoles.

The former senator is currently detained at the Philippine National Police Custodial Center pending his trial.

Rep. Revilla said the congressional investigation on the allegation De Lima had a share in the Bilibid drug trade was crucial in the administration’s bloody war on drugs.

“The ongoing House investigation is very important phase in our campaign against illegal drugs and criminality in general. So far, many of the revelations made by our witnesses are true eye-openers and because of them, we now begin to understand the intricacies of our penal system,” Rep. Revilla said.

Rep. Revilla said the House probe would enable Congress to enact or strengthen the law to stamp out drugs at the national penitentiary.

“With all the knowledge that we will gain in this investigation, we will be able to craft laws that will correct the many wrong practices inside our penal facilities,” Revilla said.

During the two-day congressional inquiry, Justice Secretary Vitaliano Aguirre II presented high-profile convicts such as Herbert Colangco, and National Bureau of Investigation Deputy Director General Rafael Ragos, among others, who all accused De Lima of earning millions of pesos from the drug trade. RAM/rga