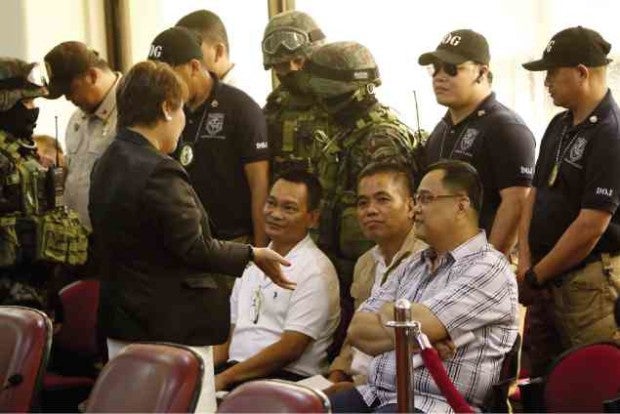 HOUSE INQUIRY High-profile inmates Jojo Baligad, Jaime Patcho and Noel Martinez get pointers from whistle-blower Sandra Cam before the start of the House of Representatives’ hearing on illegal drugs at New Bilibid Prison . RICHARD A. REYES

Justice Secretary Vitaliano Aguirre II presented five more convicts at the House of Representatives on Wednesday in his bid to tighten the noose on President Duterte’s No. 1 critic, Sen. Leila de Lima, who was linked to the illicit drug trade at New Bilibid Prison (NBP) during her term as justice secretary.

For the second day in a row, NBP inmates faced the House justice committee to accuse De Lima of complicity in clandestine multibillion-peso drug operations at the national penitentiary and of receiving millions of pesos in drug money to bankroll her senatorial campaign in May.

But there appeared to be little new information during the 10-hour hearing besides details apparently corroborating the testimonies of the previous witnesses against De Lima, who has clashed with Mr. Duterte and his allies over alleged extrajudicial killings in the administration’s war on illegal drugs. No date was set for the next hearing.

The new witnesses did not claim they directly gave De Lima money but said they either deposited cash or asked their referrals to make deposits to bank accounts controlled by her trusted lieutenants, including Jaybee Sebastian, a gang leader who emerged as the “king of drug lords” after centralizing drug operations at NBP in 2014.

Murder convict Jojo Baligad, an “adviser” of Batang City Jail, said he gave payments from the drug operations amounting to P3.8 million from January 2013 to September 2014.

“Of this amount, I know P1.5 million was directly given to Secretary De Lima, as this was directly admitted to me by Herbert Colanggo,” one of Aguirre’s witnesses, Baligad said.

Colanggo, a convicted bank robber, previously testified that he gave De Lima P60 million in total, including regular monthly payoffs of P3 million, plus P1 million for each of the lavish concerts he organized until he was transferred to the National Bureau of Investigation as part of the so-called Bilibid 19.

Colanggo’s surname was previously mistakenly spelled as “Colangco.” He told Tuesday’s hearing he was not of Chinese descent as many people assumed, though he admitted letting the misimpression go uncorrected.

Bilibid 19 refers to the group of high-profile inmates who were discovered during a De Lima-led raid to be living lavish lifestyles in NBP, and were thus transferred to the custody of the NBI in December 2014.

Most of Aguirre’s witnesses, including Baligad and Colanggo, were part of this group that had an ax to grind against Sebastian, who allegedly monopolized the drug operations for eight months after the Bilibid 19 were transferred.

Sebastian, according to Aguirre, has declined to testify on the drug operations at  NBP. In the meantime, the House committee has issued a subpoena compelling him to appear at the hearing.

Aguirre took exception to comments that his witnesses seemed “rehearsed.”

Citing the case of inmate Rodolfo Magleo, his first witness who testified on Tuesday, the Cabinet member said: “I haven’t even talked to him that day, except in the morning for 10 minutes, except when I visited him on Sunday.”

“I don’t rehearse my witnesses, and if I do, I would only ask them to speak the truth,” Aguirre said.

Lawyer Ferdinand Topacio, counsel of five of Aguirre’s witnesses, also denied De Lima’s accusation that they had been coerced into testifying against her.

“My clients have neither been threatened, cajoled, tortured nor intimidated, nor have they been subjected to torture, either physical or psychological,” he said in a statement.

Aguirre earlier told the panel he planned to file a criminal complaint against De Lima, though the investigation was still in the preliminary stage.

On Monday, De Lima was stripped of her chairmanship of the Senate justice and human rights committee after the panel heard the testimony of confessed hit man Edgar Matobato, who implicated the President in summary killings by  a notorious death squad in his hometown  Davao City.

At Wednesday’s hearing, Baligad said P1.7 million was given to then Bureau of Corrections (BuCor) Director Franklin Bucayu and his aide, who identified himself only as “Colonel Elie,” while P600,000 went to former BuCor officer in charge Rafael Ragos, another witness presented by Aguirre.

Baligad narrated the series of events that led to him making payments to people allegedly connected to De Lima.

In May 2013, when Ragos was replaced by Bucayu at BuCor, Colonel Elie called him to his office where he met with “about six other Chinese and high-profile inmates like Amin Boratong, Vicente Sy and Ben Marcelo.”

“I recognized some of them but was not sure about the others,” he said.

“In mid-2014, Herbert Colanggo asked me three times for P50,000 in different occasions, saying it was for Secretary De Lima,” Baligad said.

Another witness, Noel Martinez, a commander of the Genuine Ilocano Group, one of the biggest gangs in the maximum security compound, said the drug trade flourished under Sebastian’s leadership until November 2014.

Martinez said Sebastian introduced him to De Lima. “I saw her three to four times. There was a time they went around the maximum security compound then he would drop by Jaybee Sebastian’s hut. She knows he was the highest among the commanders,” he said.

Martinez said Sebastian asked him for help to sell “shabu” (methamphetamine hydrochloride), but to protect himself and his family, he negotiated that he only make referrals of people who could do it for him, instead of entering the transactions himself.

“All their transactions were done between themselves but I was privy to the details because they [referrals] were texting them to me. This was my basis to make sure my referrals were really working,” Martinez said.

“I wasn’t remitting the money, I was only monitoring the people I referred to JB making remittances,” he said.

Martinez said he communicated with his referrals by cell phone, and they sent him bank receipts. “Jaybee would reply ‘OK, ’pre (buddy).’”

He said the people he referred ended up selling as much as 200 kilos of shabu for Sebastian from 2013 to 2014.

In December 2014, Martinez was one of the 19 high-profile detainees forcibly removed from NBP during a De Lima-led raid and taken to the NBI.

“It’s noticeable that Jaybee was not in this group. Secretary De Lima was boasting of this raid as one of her accomplishments in dismantling the drug operation in Bilibid,” he said.

Tan claimed that a certain Jose Adrian Dera, described as a “nephew and close-in aide” of De Lima,  helped in the release of the niece of drug lord Peter Co, and her husband, who were supposedly arrested in a buy-bust operation on March 25, 2016.

Co, through Tan, gave Dera P1 million at a casino hotel in Manila for the release of his relatives. Tan claimed he also learned that Co gave Dera “a total of P5 million throughout the entire time until the senatorial elections.”

Trestiza said Danilo Martinez, a religious volunteer at NBP, began to ask him amounts from P10,000 to P50,000 soon after he claimed to be an aide of De Lima.

However, Trestiza said Martinez accused him of taking part in a grenade-throwing incident at NBP. Trestiza said he asked for help from an NBI agent named John Herra, who eventually told him to talk to one Jun Ablen who was “close” to Ragos.

Ablen and Ragos were also among the DOJ’s witnesses. Through Ablen, Ragos supposedly extorted P200,000 from Trestiza in exchange for his not being transferred to a different prison facility.

Ragos, according to Trestiza, continued to demand P100,000 weekly from him. When he could not pay, Trestiza said he, his brother Mark Anthony, and another inmate, were transferred to the San Ramon Prison and Penal Farm in Zamboanga City. With reports from Nikko Dizon and Vince F. Nonato