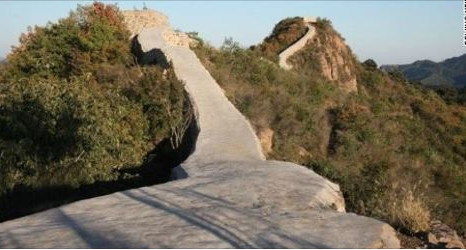 The Great Wall of China is among the Seven Wonders of the World, but netizens fear that its latest repair job might have reduced it into a typical concrete path.

Chinese officials have received ire on social media, after the ancient landmark is seen smoothed and covered in cement.

According to a BBC report, a 5-mile (8-km) stretch of the Unesco world heritage site was repaired to protect it from exposure to various elements. The affected section of the Great Wall lies in Suizhong county, along the border with Hebei province.

The ancient stone wall, which was handcrafted from stone, brick, tamped earth, wood and other materials—was reportedly refurnished using materials such as sand, lime and concrete.

“It really was an ugly repair job,” Ding Hui, head of the Liaoning Provincial Antiquities Bureau, commented in the report.

Chinese netizens, meanwhile, took to Weibo to express their disdain over the “world’s worst repair job in the world” and accused if of “ruining a part of history.”

One Weibo user even went as far as saying “the repairs are so ugly you can probably see it in space”—referring to astronauts’ claims of seeing the Wall during their voyage.

Hui said the repairs to the 635-year-old structure took place in 2014, but only came to pubic attention recently due to the pictures online.

He added that the restoration efforts were much needed to fill in broken gaps, as well as add a protective layer on the top surface, which looks “like a hat.”  The Chinese official, however, admitted that “the surface does not look ideal.”

The Chinese government has specific regulations on the preservation of the Great Wall, which is visibly crumbling in many remote locations. Other stretches were damaged so badly that they were demolished over the years.

Designed to protect the Chinese empire from northern invasions, The Great Wall once stretched 20,000 km (12,400 miles), and was once considered the world’s largest military structure.

It was built and rebuilt on a continual basis from around 220 BC until the Ming Dynasty in the 1600s. Khristian Ibarrola