Duterte: De Lima ‘screwing’ not only driver but also the nation | Inquirer News

Duterte: De Lima ‘screwing’ not only driver but also the nation 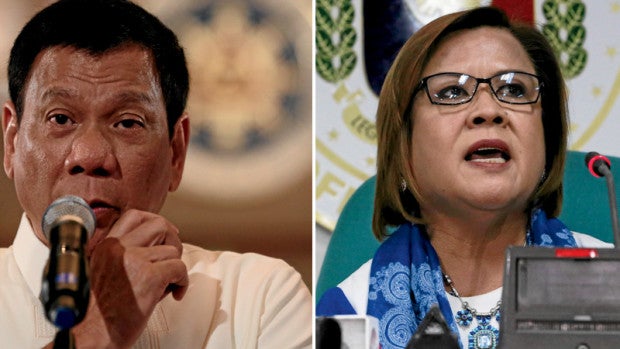 “If she were my mother, I will shoot her.”

President Rodrigo Duterte on Thursday let loose new tirades against Sen. Leila de Lima, saying she was “screwing” not only her driver but also the entire nation.

Duterte, in a speech at an inauguration of a power plant in Misamis Oriental, said De Lima had long criticized him even during her term as chair of the Commission on Human Rights (CHR).

“De Lima, she was seven years chairman of human rights. Binibira niya ako. Hindi naman nag-file ng kaso. When she was secretary of justice, she was building a name at my [expense] para ma-popular. Now what? She was not only screwing her driver, she was screwing the nation. O ngayon, saan na ang human rights? Kaninong papel ang ginamit ninyo? Where were the papers?” he said.

The President reiterated that De Lima had links to the narcotics trade.

Duterte earlier said De Lima had an affair with her former driver Ronnie Dayan, which the senator has denied. Dayan is De Lima’s alleged link to the illegal drug trade inside the New Bilibid Prison.

De Lima has denied that she is involved in illegal drugs. RC/rga