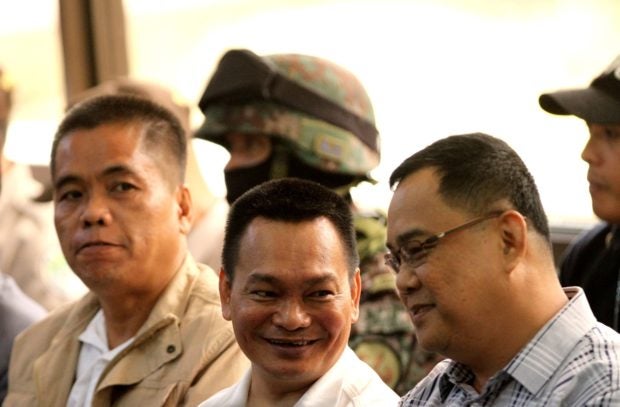 High-profile inmates turned witnesses Jojo Baligad, Jaime Pacho and Noel Martinez meet at the House of Representatives in Quezon City on Sept. 21 before the start of the committee on justice hearing on the illegal drug trade inside the New Bilibid Prison. RICHARD A. REYES/INQUIRER

A murder convict in the New Bilibid Prison on Wednesday testified that Sen. Leila de Lima had received P1.5 million from the drug trade led by robbery convict Herbert Colanggo.

During the second day of the House of Representatives justice committee inquiry over the proliferation of drugs at the national penitentiary, Jojo Rondal Baligad testified that in the middle of 2014, Colanggo on three separate occasions asked him to pay P500,000 as his share in the illegal drug trade inside Bilibid.

Baligad said from January 2013 to September 2014, his quota to the officials amounted to P3.8 million, of which amount at least P1.5 million was allotted for De Lima.

When De Lima led a raid in the Bilibid on Dec. 15, 2014, Baligad said he was among the 19 inmates who were transferred to the National Bureau of Investigation (NBI) detention center.

Baligad said De Lima pulled the inmates—including himself and Colanggo—out of the maximum security compound to allow kidnap for ransom convict Jaybee or JB Sebastian, allegedly De Lima’s favored drug lord, to dominate the drug monopoly and raise funds for her senatorial campaign.

Baligad said Sebastian’s drug trade flourished in the eight months the 19 inmates were transferred to the NBI detention center.

He said the 19 inmates were returned to the Bilibid Building 14 in August 2015.

Baligad said new BuCor Director Reynier Cruz ensured that Sebastian had been transferred to Building 14 in the current administration.