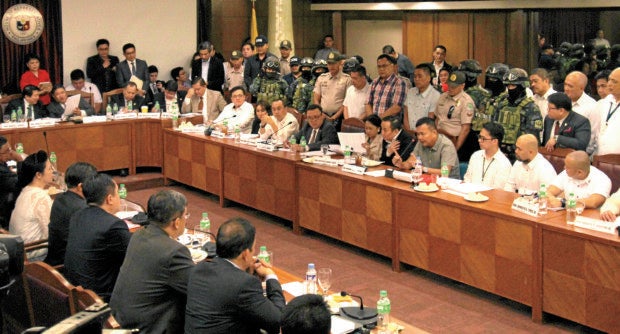 National Bureau of Investigation (NBI) intelligence officer Jovencio Ablen Jr. on Tuesday testified before the House of Representatives inquiry that he drove his superior who delivered bags of alleged drug money to Senator Leila De Lima.

During the House of Representatives justice committee inquiry over the proliferation of drugs at the national penitentiary, Ablen said in November 2012, he was told by his superior NBI Deputy Director General Rafael Ragos that they would deliver a P5-million “quota” for “lola (grandmother),” who turned out to be De Lima.

Ablen said he peeked at a bag containing wads of P1,000 peso bill.

Ragos then went down from the vehicle and went  to De Lima’s supposed driver and alleged lover Ronnie Dayan, who was waiting across the street at the gate.

Ablen said from the car, he saw Ragos hand over to Dayan the bag of money.

Ablen said from where he was seated, he was able to see De Lima in a duster waiting for Ragos to enter her house.

(When he was walking towards the house, I saw the gate was opened and there was Ronnie Dayan.)

(He handed the black handbag to Ronnie Dayan [who] received it. Deputy Ragos went inside the main door. There I saw Sec. De Lima, standing, waiting.)

When Ragos got back, Ablen said he was told to keep quiet.

(You saw nothing, you know nothing.)

Ablen said a month later,  in December 2012, he again drove Ragos to De Lima’s residence to deliver a box of money wrapped in a plastic bag. But he only saw Dayan waiting for Ragos at the gate.

During the trip, Ablen noticed that Ragos looked irritated.

(When we were on the road, I noticed he’s irritated. I asked if the quota has been met [by De Lima and Dayan], he got irritated.)

(He raised his voice, saying ‘What else, [sonavabitch], they’re the only ones [receiving money]’. He was very irritated I didn’t bother [him anymore].)

Ragos would also testify against De Lima, who was accused of earning from the illegal drug trade in the New Bilibid Prison in cahoots with drug lords.

Earlier during the hearing, Bilibid convict Herbert Colangco testified that he sold drugs in the Bilibid to raise funds for De Lima’s senatorial campaign.