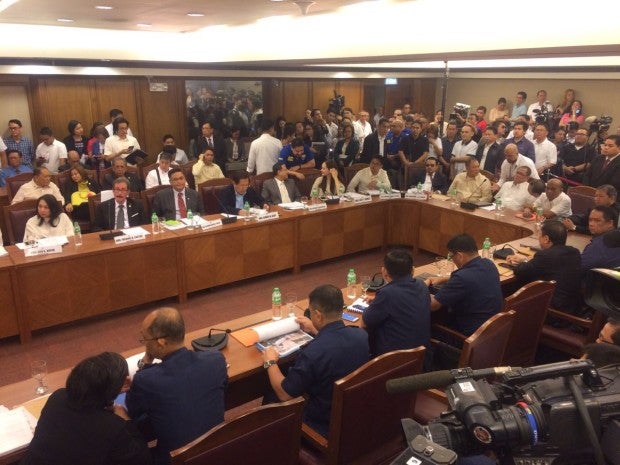 Oriental Mindoro Rep. Reynaldo Umali, who chairs the House of Representatives justice committee investigating the drug proliferation in the New Bilibid Prison (NBP), said the hearing was not about Senator Leila De Lima.

In his opening statement on Tuesday, Umali said the House inquiry in aid of legislation would not be about De Lima, who was accused of earning kickbacks from the illegal drug trade in Bilibid.

“This is not about Senator De Lima, who is my sister. This is really about proliferation of drug syndicates in Bilibid,” Umali said.

Umali also refuted De Lima’s claim that the congressional probe was a sham and the House justice committee a “kangaroo probe.”

“I would just like to disabuse mind of my sis that this is sham hearing, a kangaroo committee being conducted here,” Umali said.

Umali was a partymate of De Lima in the Liberal Party during the previous 16th Congress before he jumped to President Rodrigo Duterte’s party Partido Demokratikong Pilipino-Lakas ng Bayan (PDP-Laban) in the 17th Congress.

Colangco would testify that he sold drugs in Bilibid upon orders of kidnap-for-ransom convict Jaybee Sebastian to raise funds for De Lima’s senatorial bid, Aguirre said.

On the other hand, National Bureau of Investigation (NBI) deputy director general Rafael Ragos and his escort Jun Ablen would testify that they delivered P10 million to De Lima from the Bilbid drug trade. Ragos was the officer-in-charge of the Bureau of Corrections then.

READ: De Lima in for a surprise, Alvarez says of House Bilibid probe | No ‘moro-moro’ in House probe of Bilibid drug trade — solons

House leaders denied that the congressional probe would be a scripted demolition job against De Lima as a reprisal for her investigation on extrajudicial killings.

Last week, De Lima presented professed hitman Edgar Matobato as a witness who testified that he acted upon the orders of Duterte to kill the latter’s critics and rivals when he was Davao City mayor.

The President had tagged De Lima in a drug matrix and accused her of earning from the Bilibid drug trade, an allegation the lady senator had vehemently denied.

De Lima as a former human rights commissioner had also investigated Duterte when he was Davao City mayor for his links to the Davao Death Squad, allegedly responsible for the vigilante killings of suspected criminals in Davao City.

Aguirre has named robbery and drug dealer convict Colangco and Ragos as among the high-ranking witnesses to testify against De Lima.

De Lima has refused to attend or send a representative to what she called a sham probe. RAM/rga