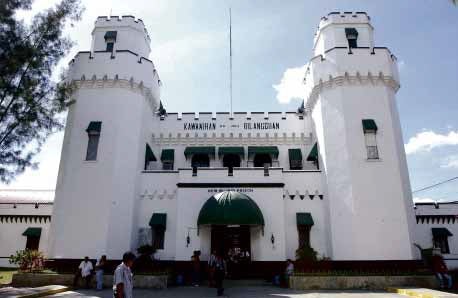 Also tagged in the matrix  are:

De Lima and Dayan are on top of the matrix. Dayan is described as “BF of De Lima since the CHR days. Started as driver, now known as BOSS De Lima or ‘Case Fixer’ of Urbiztondo, Pangasinan of well-known politicians.” 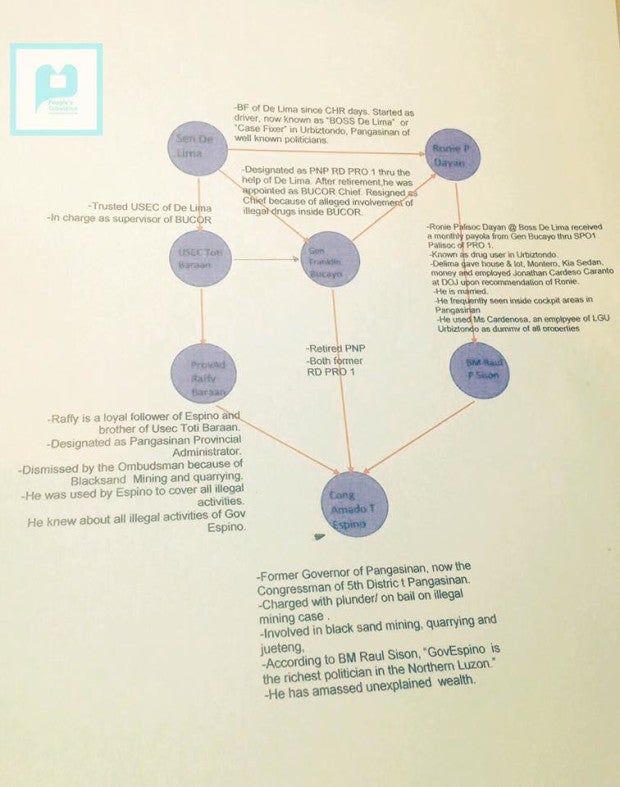 A copy of the “Muntinlupa Connection” matrix showed by President Duterte to the members of the media in Davao City on Thursday, August 25, 2016. Courtesy of PTV-4

The matrix says Bucayo was “designated as PNP RD PRO 1 thru the help of De Lima.”

“After retirement, he was appointed as BUCOR chief,” the matrix said. “Resigned as Chief because of alleged involvement [in] illegal drugs inside BUCOR.”

BUCOR stands for Bureau of Corrections.

An arrow connects Undersecretary Baraan with his brother, Pangasinan City Administrator Raffy Baraan, who is connected with Espino, described in the matrix as the “richest politician in Northern Luzon,” and another arrow with Bucayo.

According to the matrix, Espino used Raffy Baraan as cover for his alleged illegal activities. Espino has been charged with plunder for illegal mining case.

Both Espino and Baraan were involved in black sand mining in Pangasinan.

A certain “Ms Cardenosa” also appears in the matrix. She is connected with Dayan and serving as the dummy for his properties.

Sison is connected with “Ms Cardenosa” and Espino, the matrix shows.

Prior to releasing the matrix, Duterte said that he was reviewing and investigating the linkages of the names on it.

But on a midnight news conference in Davao City, the President gave the members of the media a sneak peek./ac