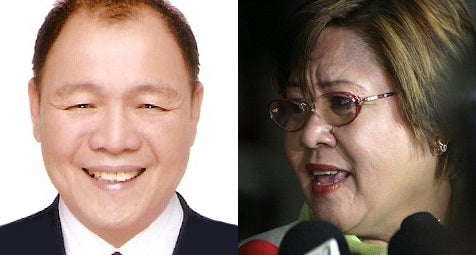 National Bureau of Investigation Depute Director Rafael Ragos (left) will tell the House of Representatives on Tuesday, Sept. 20, 2016, that he delivered P5 million from the Bilibid to then-Secretary of Leila de Lima (rght), according to Justice Secretary Vitaliano Aguirre. The testimony will be on the alleged proliferation of the illegal drug trade at the penitentiary during the time of De Lima. BUCOR PHOTO / INQUIRER FILE

A ranking official of the National Bureau of Investigation (NBI) will testify before the House of Representatives that on several occasions he delivered P5 million from the New Bilibid Prison to then-Secretary Leila De Lima, Justice Secretary Vitaliano Aguirre II said Monday.

Aguirre said NBI Deputy Director Rafael Ragos would be among the first witnesses to be presented in Congress in Tuesday’s hearing on the proliferation of illegal drugs inside the National Penitentiary.

Ragos is known to have close ties with De Lima prior to his stint at the NBI. He was appointed director of the Bureau of Corrections (BuCor) from 2012 to 2013.

Aguirre said Ragos admitted that during his stint as officer-in-charge of the BuCor there were instances when he delivered ‘Bilibid’ money to De Lima who was then Justice Secretary.

BuCor and the NBI are agencies under the Department of Justice.

Aguirre said Ragos made the admission after he was confronted when his driver-escort Junior Ablen who is also still with the NBI testified on the delivery of money.