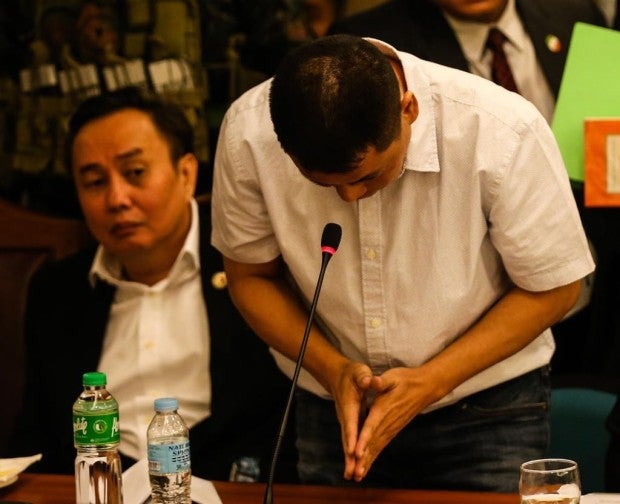 Colangco describes a conversation he had with then Sec. Leila de Lima whom he bowed to in thanks during the congressional probe on the illegal drug trade at the New Bilibid Prison Sept. 20, 2016. L. Rillon/Inquirer

During a House of Representatives justice committee inquiry over the proliferation of drugs at the national penitentiary, Colangco said he also sold 300 boxes of beer at the maximum security compound where De Lima allegedly has a P1-million share.

Colangco said in Jan. 2014, he met De Lima’s security aide Joenel Sanchez who asked Colangco if he had agreed to tie up with Sebastian to sell drugs for De Lima.

Colangco said he does not trust Sebastian because he was duped the latter before into signing a document to share their territory at the maximum security compound.

(On the second week of January, Joenel approached me. He asked me, ‘Why didn’t you return? I heard Jaybee and you have already talked. I said, ‘Sir Joenel, I don’t trust him. He might fool me and end up with a good image in the eyes of De Lima.)

Colangco said in that meeting with Sanchez, he asked the security aide if he could talk to De Lima over the cellular phone.

Colangco said he told De Lima over the phone that he had secured the P3 million for her.

(I said, ‘Ma’am, this is Herbert.’ She said, ‘How are you?’ I was thinking this might not be secretary. But I recognized in her voice that it was really De Lima. Ma’am, I would just like to confirm, Sir Joenel is here with an instruction to me. She said, ‘Okay, I would leave it to you.’)

(‘I would also like confirm [the deal] in October.’ They started collecting the P3 million in October. ‘Ah okay okay, Herbert, thank you.’ That was we talked about. It was a short conversation.)

Cebu Rep. Deputy Speaker Gwen Garcia told the hearing that she typed the number Colangco mentioned in her phone and found out that the same number registered as De Lima’s. RAM/rga