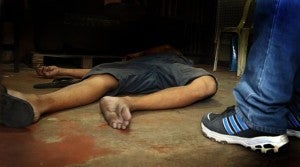 SUBIC, Zambales — Unidentified assailants shot dead a man who was sleeping inside his home at dawn on Monday (Sept. 19), police said.

The attack was witnessed by the victim’s older brother and a nine-year-old nephew who were at the living room, police said.

The killers, who wore masks and hooded sweatshirts, fled in a gray sedan.

The victim’s brother said Trinidad was planning to surrender to authorities under the government’s “Oplan Tokhang” anti-drug campaign.

Police recovered three cartridges and a spent bullet fired from a .45-pistol from the crime scene.  SFM/rga