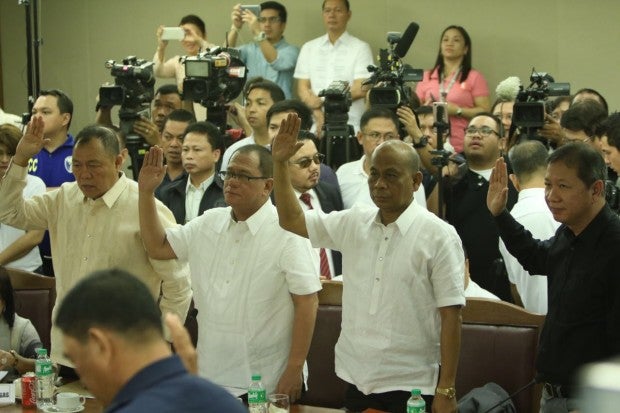 Rodolfo Magleo, a former police inspector convicted of kidnapping in 2001, testified before the House of Representatives on Tuesday that Senator Leila de Lima was paid millions to give preferential treatment to drug dealer Jaybee Sebastian.

During the House  justice committee inquiry into the proliferation of drugs at the national penitentiary, Magleo, an inmate at the maximum security compound, said he met De Lima and her driver Ronnie Dayan in mid-2012.

Magleo, who heads the gang group Kalasag, said De Lima met with him and three other inmates and asked for their numbers. De Lima also gave her number.

Magleo said they were tasked to raise funds for De Lima by selling drugs.

Magleo said Dayan would then coordinate with the inmates and ask them for their weekly due of P50,000.

But the inmates failed to reach the quota, while convict Jaybee Sebastian was able to reach his P100,000 quota for Dayan.

Magleo said Sebastian and De Lima were close. He said De Lima visited Sebastian in the latter’s “kubol” and spent two to three hours there.

Magleo said he sensed something intimate between Dayan and De Lima, especially because Dayan used to boast to him that De Lima promised to finance Dayan’s barangay captain bid in Urbiztondo.

Magleo said he once had a drinking spree with Sebastian who boasted that he paid P10 million to De Lima for the pull-out of the so-called “Bilibid 19.”

Magleo said the pull-out of Sebastian’s competitors from the maximum security compound enabled Sebastian to control the drug trade.

Magleo said among the entertainers who performed at the maximum security compound were Sharon Cuneta, Ethel Booba, and Mocha Girls. CDG/rga