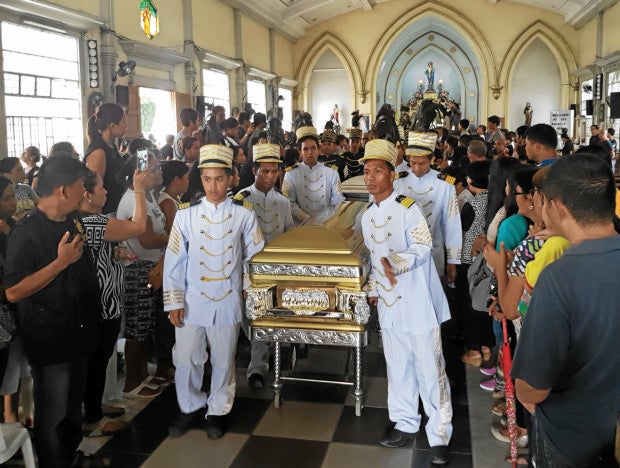 The coffins of Meriam and Melvin Odicta being brought out from the Immaculate Conception Parish Church In Tanza in Iloilo City (Photo by Nestor P. Burgos Jr./INQUIRER VISAYAS)

People filled the aisle of the church and spilled out of its doors as they paid their last respects to the slain couple whom they called “Toto Boyet” and “Inday Meriam.”

“I came here to see them for the last time. They treated my brother and his family very well,” said a 46-year-old woman from Barangay Rizal Estanzuela who came with a niece.

Her brother is one of the drivers of the Melvin taxi fleet operated by the couple.

Among those who came to bid their farewell were family members, employees, and supporters.

Some of them were ferried by the family-owned Melvin taxi and Meriam transport while others hired passenger jeepneys. 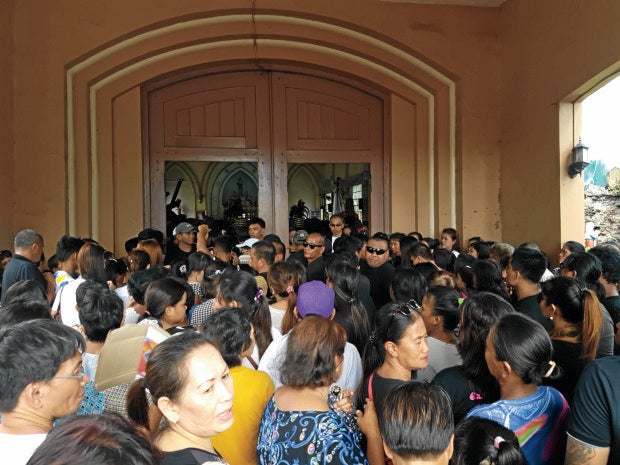 A gunman repeatedly shot the couple minutes after they disembarked from a passenger vessel at the Caticlan port in Malay town in Aklan on Aug. 29.

Law enforcement agencies tagged Melvin as the head of two main illegal drug groups in Western Visayas. They believed his wife was also involved in the illegal drug trade.

The couple had denied the allegations and insisted they were operators of legitimate businesses including a taxi fleet and restaurant.

Even before the Requiem Mass had ended, the crowd who were straining to see the coffins moved towards the altar where the gold coffin for Meriam and silver coffin for Melvin were displayed.

In his homily, Fr. Renato Cuadras, main celebrant, quoted the statement of the Couples for Christ lay organization against extrajudicial killings.

“Everybody agrees that the illegal drug problem must be eradicated. But must it be done this way?” he said in the Mass that was co-celebrated by Fathers Norberto Tacadao, parish priest, and Lorenzo Camacho.

“Are we better off than the addicts or their pushers who cause rapes and other heinous crimes, when we kill with impunity, when we spill innocent blood? Does the end justify the means? When we don’t even know whether the ends will really be achieved?” Cuadras said, quoting the statement.

More than 120 vehicles packed with family members, employees and their neighbors and supporters joined the funeral convoy from the church to the Forest Lake Memorial Garden in Mandurriao District about six kilometers away. 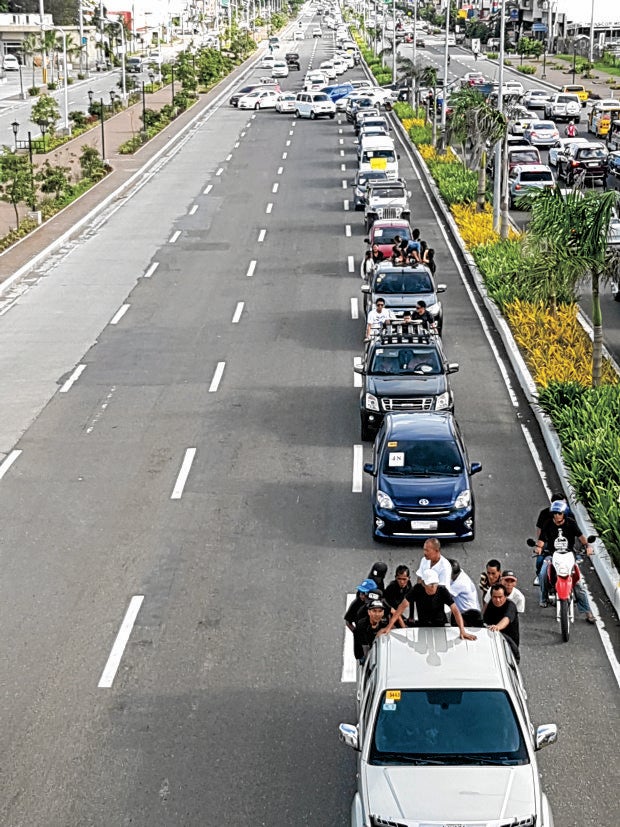 Traffic was slow along Rizal Street where the convoy started and along the Sen. Benigno Aquino Jr. Avenue.

The family of Melvin and Meriam last Friday submitted to the Police Regional Office in Western Visayas an affidavit expressing lack of interest in pursuing the investigation and filing criminal complaints related to the couple’s killing.

READ: Odicta clan: We will not sue over deaths, we want peace

SPO1 Nida Gregas, spokesperson of the Special Investigation Task Group Odicta, said the task group has not received a copy of the affidavit but confirmed it was filed before the Western Visayas police office.

She said the investigation being conducted by the task group will continue because the killing of the couple is a public crime.

The task group will automatically be dissolved after six months if no suspect has been charged. The Criminal Investigation and Detection Group will take over the investigation.

The Philippine Drug Enforcement Agency (PDEA) in Western Visayas said the death of Melvin resulted in a drop of drug supply in Iloilo and other parts of Panay from 30 to 20 percent.

He said this was based on estimates that the group of Odicta and another led by Richard Prevendido supplied from 50 to 60 percent of illegal drugs in Iloilo and other provinces on Panay Island.

The other 40 percent is supplied by “freelancers” or those who don’t belong to the two groups.

“The operation of the group has been disrupted by their deaths. (The group members) could be lying low or in hiding,” Garcia told the INQUIRER.

“We are monitoring if this will continue and what will happen next after the burial,” he said. With a report from Joel Franco, Inquirer Visayas/JE/rga