Odicta clan: We will not sue over deaths, we want peace | Inquirer News

Odicta clan: We will not sue over deaths, we want peace

ILOILO CITY — The families of the slain suspected drug lord, Melvin Odicta,  and wife Meriam Odicta, will not file any case amid lingering questions on how the couple were killed and who ordered it.

“We are not interested in filing any cases or to press for an investigation. We want peace for the sake of their children and love ones left behind,” Barangay Tanza-Esperanza Chairman Noel Odicta, Melvin’s younger brother, told the Philippine Daily Inquirer, at the Odicta residence on Wednesday.

The village official also appealed to President Duterte and Philippine National Police Director General Ronald Dela Rosa:  “Mr. President and General Bato. We have accepted what had happened to them. We are innocent and we are not involved in whatever they have been accused of. The past is past. If they have done wrong, we apologize. They are already dead,” Noel said.

The PNP and Philippine Drug Enforcement Agency had tagged Melvin as “Dragon,” the head of one of two main illegal drugs syndicates operating in Iloilo and other parts of Western Visayas.

The couple had denied these allegations and had insisted that they were operators and owners of legitimate businesses.

They went to Manila and met with Interior Secretary Ismael “Mike” Sueno on Aug. 25, to clear their names and to seek security assistance amid concerns of a rubout.

The next day, on Aug. 26, Dela Rosa dismissed Odicta’s denial and confirmed that the Iloilo businessman was the top drug lord in the region.

The couple were shot dead by an unidentified assailant early on Aug. 29 after they got off the roll-on, roll-off vessel MV St. Anthony De Padua at the Caticlan port in Malay, Aklan.  SFM 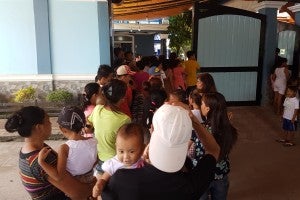 Neighbors and employees of the slain suspected drug lord, Melvin Odicta, and wife Meriam wait at the gates of the Odicta residence in Barangay Malipayon in Iloilo City after the remains of the couple arrived Wednesday afternoon. (Photo by Nestor P. Burgos Jr./ INQUIRER VISAYAS)