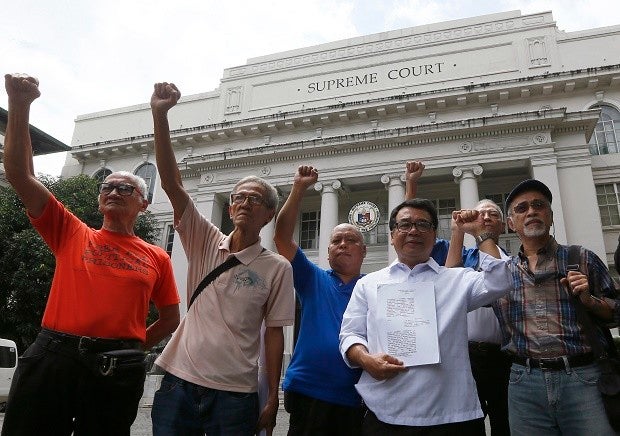 MANILA, Philippines — Lawyers for victims of Philippine dictator Ferdinand Marcos’s regime said Wednesday that the late leader was a despot and oppressor unfit for a hero’s burial, as they argued at a hearing on petitions against President Rodrigo Duterte’s directive to have Marcos buried at a heroes’ cemetery.

One of the lawyers, Rep. Edcel Lagman, urged the Supreme Court to prevent “a national tragedy” by prohibiting such a burial, saying it “would glorify a dictator, distort history and aggravate the injustices to human rights violation victims.”

Duterte has remained firm in his decision to allow the burial despite growing opposition, saying he is only following the law, which allows former soldiers and presidents to be buried at the Heroes’ Cemetery in Manila.

Marcos, who was ousted in a 1986 “people power” revolt, died in exile in Hawaii in 1989. His remains are displayed in a glass coffin in his hometown, but his family wants him buried at the Heroes’ Cemetery.

READ: SC justices ask: ‘Who can be considered as heroes?’

It is unclear when the burial is being planned for, but Marcos’s son Sen. Ferdinand Marcos Jr. was cited by a newspaper as saying Sept. 18 was being considered for the burial date.

Lagman, whose brother was a victim of involuntarily disappearances during Marcos’s rule, told the court that the late strongman’s cardinal sins against Filipinos included declaring martial law to perpetuate his power. Other tactics used by Marcos that he cited included jailing perceived enemies of the state without trial, padlocking Congress, forcibly closing media outlets and amassing billions of dollars of ill-gotten wealth.

Lagman noted that the Supreme Court had confirmed the Marcoses’ plunder in previous cases, and that Switzerland had turned over $356 million hidden by the Marcoses in Swiss banks. He also noted that the U.S. District Court of Hawaii validated the brutalities of martial law when it ruled in 1992 that Marcos was culpable of human rights violations against around 10,000 claimants and held the Marcos estate liable for damages.

The Marcos family’s agreement 23 years ago with then-President Fidel Ramos’ administration that his remains be flown directly to his northern hometown and be given a quick burial also remains binding and precludes a hero’s burial, Lagman said.

Ibarra Gutierrez, a lawyer for another group of petitioners, said the president’s discretion on the burial is not absolute and is bound by several laws and numerous decisions of the Supreme Court.

“It is crystal clear that the burial of Marcos at the (Heroes’ Cemetery) does not serve any legitimate public purpose,” Gutierrez said. “Most certainly, Marcos had no contribution to Philippine history and culture that is worthy of recognition.”

As the hearing went on, hundreds of Marcos supporters wearing red shirts banged on drums to drown out chants by dozens of activists opposed to the burial who shouted “Marcos, Hitler, Dictator, Puppet!” from across the road.