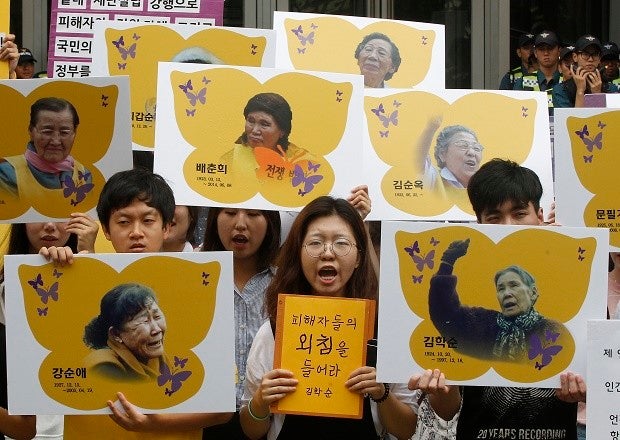 In this Thursday, July 28, 2016 file photo, protesters hold the portraits of the former South Korean sex slaves who were forced to serve for the Japanese military in World War II, during a rally against the establishment of the Japanese government-funded Reconciliation and Healing Foundation in Seoul, South Korea. South Korea said on Thursday, Aug. 25, 2016, surviving South Korean women who were forced into sexual slavery by Japan’s military in World War II will be eligible to receive 100 million won (about $90,000) each from a foundation that will be funded by the Japanese government. AP FILE PHOTO

SEOUL, South Korea — Twelve South Korean women who were forced into sexual slavery by Japan’s military in World War II have sued the Seoul government over a deal it reached with Tokyo to pay the victims, saying it doesn’t go far enough to establish Japan’s responsibility.

The plaintiffs are each seeking 100 million ($90,000) from the South Korean government, which they say failed to hold the Japanese government legally responsible when it agreed to the settlement in December, a spokesman from the Seoul Central District Court said Wednesday. He didn’t want to be named, citing office rules.

The lawsuit was submitted days after South Korea’s Foreign Ministry said surviving victims will each be eligible to receive around 100 million won from a foundation that will be funded by the Japanese government. The ministry said the families of deceased victims will receive about 20 million won ($18,000), and added it expects the Japanese government to soon transfer a promised 1 billion yen ($9.9 million) to the Seoul-based foundation launched in July.

Many in South Korea believe the Seoul government settled for far too less in the sex slave deal and that Japan still hasn’t acknowledged legal responsibility for atrocities during its colonial occupation of the Korean Peninsula from 1910 to 1945. Several South Korean victims, including at least six of the plaintiffs who sued the South Korean government, said through local media they will reject payments offered from the foundation.

Under the December agreement, which was described by both governments as “irreversible,” Japan pledged to fund the foundation to help support the victims. However, Japan said it didn’t consider the 1 billion yen it promised to the fund as compensation, saying such issues were settled in a 1965 treaty that restored diplomatic ties and was accompanied by more than $800 million in economic aid and loans from Tokyo to Seoul.

South Korea, in exchange, vowed to refrain from criticizing Japan over the issue and will try to resolve a Japanese grievance over a statue of a girl representing victims of sexual slavery that sits in front of the Japanese Embassy in downtown Seoul.

Historians say tens of thousands of women from around Asia, many of them Korean, were sent to front-line military brothels to provide sex to Japanese soldiers. At the time of the sex slave deal, Seoul said there were 46 surviving South Korean victims.