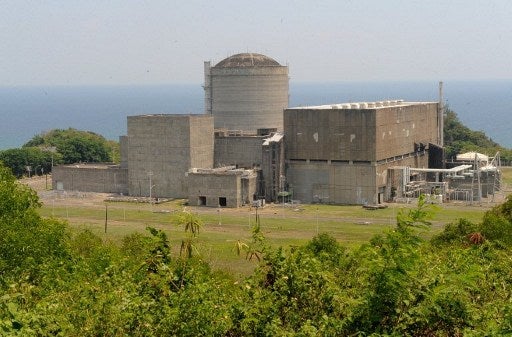 MANILA, Philippines—Despite doubts on its safety, nuclear power is “a good option” for the Philippines.

Energy Secretary Alfonso Cusi said this before the Senate on Wednesday as he bared that the Department of Energy (DOE) has initiated a study on the possible utility of the mothballed Bataan Nuclear Power Plant (BNPP).

At hearing of the Senate committee on energy, Cusi said nuclear power was among options that the DOE was pursuing to ensure long-term energy stability for the country, along with other power sources.

“Based on my knowledge, based on what I’ve seen, based on what I studied, based on the experience of other countries that we have heard, it is a good option for our country. It is safe to use,” said Cusi when Sen. Leila De Lima sought his categorical response on the use of the BNPP.

“The hard fact is that even while nuclear power is unpopular, we’re looking at it, we’re studying it. It’s an option,” he told the hearing chair by Sen. Sherwin Gatchalian.

He said the nuclear option was under consideration as the DOE endeavors to build a 30,189 megawatt (MW) reliable supply for the country by 2030, given the forecast demand and anticipated economic growth.

The current national energy supply is at 17,925 MW, sufficient for the demand for 13,500 MWs. Cusi said the supply is only compromised by unexpected outages and simultaneous maintenance shutdowns of powerplants, a situation that led to the supply shortage in Luzon a month ago.

Cusi pointed out that nuclear power was viable as it is cheap to produce and has greater longevity than other depletable sources such as natural gas and coal.

“Coal and fuel has a lifespan. Nuclear power has a longer life, so we will have a more secure [supply]. The hard fact is that we know that nuclear power is not popular, but it is our responsibility to look at it and study it for nation-builiding,” he said.

He cited the wide use of nuclear power in other countries, including Indonesia, where the Philippines sources its coal.

The BNPP, built in the 1970s at $2 billion, has never produced a single kilowatt, as Sen. Richard Gordon noted. It has been maintained at an annual cost of P27 million.

Cusi said the DOE will “go through the process” in deciding on its operation, adding that the public will be consulted about the option. Opening the power plant will cost an estimated $1 billion. RAM