Trump vows to begin deportations immediately if sworn in 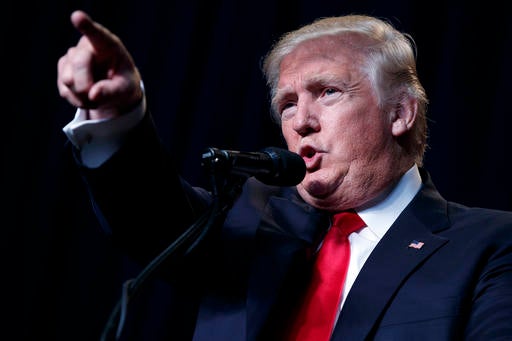 WASHINGTON, United States — Republican presidential nominee Donald Trump linked illegal immigration and employment Saturday, pledging to start deporting offenders as soon as he is sworn in should he become the White House’s next occupant.

Trump all the while courted the black vote, claiming that the shooting of basketball star Dwyane Wade’s cousin will make African Americans support him, but the move instead triggered a firestorm of criticism.

Trump’s Democratic rival Hillary Clinton served as secretary of state during President Barack Obama’s first term in office. The next president will be sworn in on January 20.

“I am going to build a great border wall, institute nationwide e-verify, stop illegal immigrants from accessing welfare and entitlements and develop an exit-entry tracking system to ensure those who overstay their visas are quickly removed,” Trump warned.

The billionaire real estate magnate and former reality TV host — in a white baseball cap — said that “If we don’t enforce visa expiration dates, then we have an open border. It’s as simple as that.”

Details of Trump’s immigration policies remain scant. He rallied much of his primary support with a controversial hardline tone against illegal immigrants and his plan to build a wall on the Mexican border.

Some of his advisors are now reportedly urging him to tone down his signature policy priority.

Hours before, Trump had tweeted: “Dwayne Wade’s cousin was just shot and killed walking her baby in Chicago,” initially misspelling the basketball player’s first name before correcting it later. “Just what I have been saying. African-Americans will VOTE TRUMP!”

He was referring to the shooting death on Friday of Nykea Aldridge during an exchange of gunfire between two men as she pushed a baby stroller in Chicago.

Trump’s comments unleashed a torrent of criticism spearheaded by actor Don Cheadle, who has starred in such films as “Hotel Rwanda” (2004), denouncing the bombastic billionaire for trying to score political points on the back of a murder.

“He doesn’t give a fkk. More red meat to his alt-right troglodytes,” Cheadle wrote on Twitter, referring to an ultra-conservative movement largely seen as white supremacist and anti-Semitic.

“You don’t get to cherry pick. All the architects on left and right have failed that city. But Drumpf ain’t the ansr.”

Cheadle lambasted the 2016 presidential election for being “like a Shakespearean farce except it could end in a mushroom cloud.”

Several hours after firing off his first tweet on Wade, Trump offered a more somber and contrite message: “My condolences to Dwyane Wade and his family, on the loss of Nykea Aldridge. They are in my thoughts and prayers.”/rga

A Trump presidency and the consequences for Filipinos