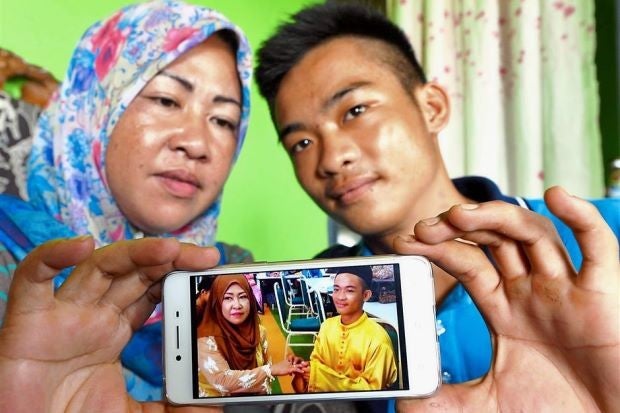 Dayang Sopiah Gusti, a single mother of five, is now married to Mohd Sufie. And both their families have given their blessings to the union.

They met during a volleyball match in May and last week, their solemnization ceremony took place at Kuala Penyu town in Sabah.

A picture of Mohd Sufie putting a ring on Dayang Sopiah’s finger has gone viral on Facebook.

It became a top read story in The Star Online, besides being given cove­rage by Malay dailies.

“Since getting to know her, she has always been concerned about me. I told my family that I wanted to marry her,” Utusan Malaysia quoted Mohd Sufie as saying.

“It does not matter what others say. I would surely do the best to take care of my wife,” he added.

His family, he said, had backed their decision to marry.

Dayang So­­piah, whose children are aged from seven to 16, said Mohd Sufie was quite mischievous.

“He makes friends easily,” she added.

Alin @ Matalin Utam, 52, who is the father of the groom, was quoted by Harian Metro as saying that he knew about the relationship just a few days before the wedding and was initially surprised.

However, he said had no problem with it: “To me, Sopiah is the match for Sufie as decided by God.”

It was reported that Sopiah’s children were also accepting Sufie, who works as a sales assistant in Labuan./rga

Father and daughter set to marry, have kids