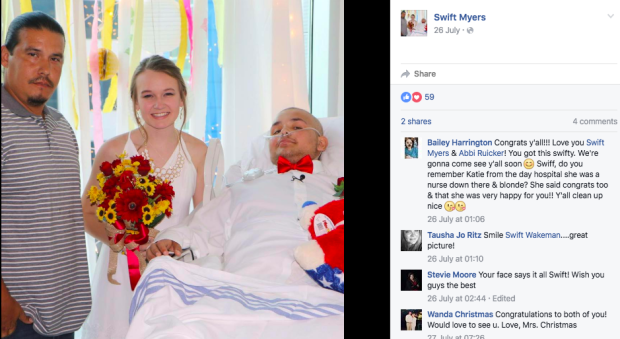 Not everyone gets a chance to tie the knot with the love of his or her life, but luckily for a cancer-stricken lad, he managed to do so despite being stuck in a hospital bed.

The 18-year-old student, who has been battling Ewing sarcoma, a cancerous tumor that occurs in bones or soft tissues, was told by doctors four times in a week’s period that he might not make it through the night.

Two days before their wedding day, Myers asked his girlfriend of two years to marry him.

“He said, ‘Will you be my wife?’ and we’ve always joked about so I just kind of laughed,” Ruicker told ABC News. “The next day he said, ‘You know I was being serious right?”

The groom-to-be then picked up the phone and called Ruicker’s father to ask for his blessing. Once he got his approval, the wedding planning began immediately.

“Some of the nurses were in the room and as soon as they heard the conversation they took off,” Ruicker said. “They did everything.”

The staff acted as the couple’s wedding planners and began gathering decorations and finding a wedding cake, the report said. They also hired an official videographer and photographer for the sacrament.

“It felt like I was hearing a love story straight out of a movie,” Megan Ready, the couple’s wedding photographer, was quoted in the report as saying. “I was humbled to have been asked to document such a special occasion.”

Around 100 of the couple’s friends and families, along with hospital doctors and nurses, packed the small hospital room to witness the young couple wed.

The ceremony was even  live-streamed on Facebook for those who were unable to attend, while some guests lined a sidewalk outside to celebrate the couple from afar.

After exchanging vows and sealing their marriage with a kiss, the couple hosted a wedding reception.

“I’m really grateful for the nurses,” Ruicker said. “They are still at work and still went through and did all of this in less than two days for us and that really meant a lot.”

Myers, meanwhile,  continues treatments for his cancer, with his wife by his side every minute of the day.

“Since the wedding he’s been much better and in better spirits,” Ruicker disclosed.  Khristian Ibarrola