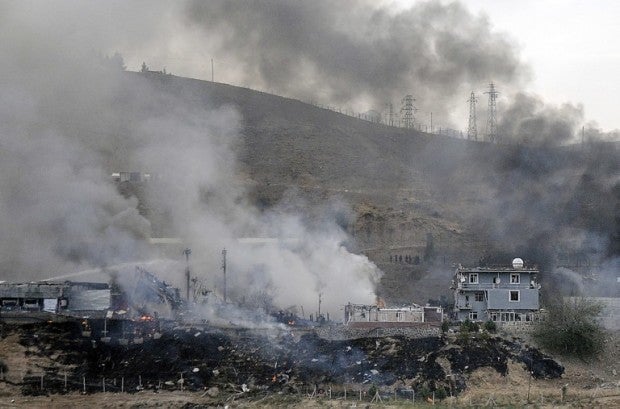 Turkey on Saturday said the military suffered its first fatality in an unprecedented four day campaign inside Syria, blaming Kurdish militia in an increasingly combustible contest for control in the border region.

The Turkish army on Wednesday launched the two-pronged cross border offensive against Islamic State (IS) jihadists but also Syrian Kurdish militia detested by Ankara, sending in dozens of tanks and hundreds of troops.

Tensions between Ankara and the Kurdish militia flared Saturday, with clashes taking place eight kilometers south of the town of Jarabulus, the border town recaptured from IS this week by Turkish-backed Syrian rebels, a monitoring group and Kurdish sources said.

The dead soldier — who has not been identified — was the first confirmed Turkish fatality of Turkey’s unprecedented operation in northern Syria which has so far proceeded with lightning pace.

The toll was confirmed by a Turkish official, without giving further details.

The rocket fire came from members of the Kurdish Democratic Union Party (PYD), Anadolu said. Turkey considers the PYD and its People’s Protection Units (YPG) militia to be terror organisations.

Anadolu said that the Turkish army responded to the rocket attack by shelling PYD targets in Syria, without giving further details.

The self-proclaimed Kurdish authorities in northern Syria said in a statement that the local fighters backed by Kurdish forces “destroyed two tanks and killed its crews” near the village of Al-Amarneh.

In a separate incident Saturday, Kurdish militants fired four rockets at the airport in the southeastern Turkish city of Diyarbakir, without causing casualties, the Dogan news agency said.

The pro-Kurdish fighters said earlier Turkey had for the first time carried out airstrikes on its positions.

“With this aggression, a new conflict period will begin in the region,” said the Jarabulus Military Council which is linked to the Kurdish-dominated Syrian Democratic Forces (SDF).

Anadolu agency reported that the army had carried out strikes against a weapons arsenal and command post belonging to “terror groups.”

The fighting indicates Turkey is entering into a new and more dangerous phase in Syria four days into operation “Euphrates Shield.”

On Saturday, an AFP correspondent at the Turkish border village of Karkamis saw six more tanks crossing into Syria, adding to the dozens of tanks and hundreds of troops already in the country.

Anadolu said pro-Ankara fighters — backed by Turkish troops and firepower — had now taken five more villages from IS after the capture of Jarabulus.

Turkey fiercely opposes moves by the YPG — which it regards as the Syrian branch of the outlawed Kurdistan Workers Party (PKK) — to expand into territory lost by IS.

Ankara fears the emergence of a contiguous autonomous Kurdish region in Syria would bolster the PKK rebels across the border in southeast Turkey.

Its campaign against the Kurdish fighters puts it at odds with NATO ally the US, which supports the YPG as an effective fighting force against IS.

Ankara says that the YPG has failed to stick to a promise to return across the Euphrates river after advancing west this month despite guarantees given by US Vice President Joe Biden on a visit to Ankara on Wednesday.

On Saturday, the last rebel fighters were evacuated from Daraya just outside the Syrian capital Damascus, under a plan to end a brutal four-year siege of the town that brought the population to the brink of starvation.

Hundreds of fighters and their families were bused north into rebel-held territory in Idlib province.

“The Syrian army completely controls Daraya and has entered all of the town. There isn’t a single armed man there,” a Syrian military source told AFP.

The rebels said they were forced to give up the town, which was one of the first to rise up against the government, accusing Damascus of using “starve or surrender” tactics.

The roughly 8,000 civilians left in the town are also to be evacuated.

In Syria’s northwest, fighting continued to rage between Syrian government forces and rebels in the battered city of Aleppo, in spite of tentative plans for a 48-hour ceasefire.

At least 15 civilians were killed in barrel bomb attacks by regime aircraft on the rebel-held Maadi district in the city’s east, the Britain-based Syrian Observatory said.